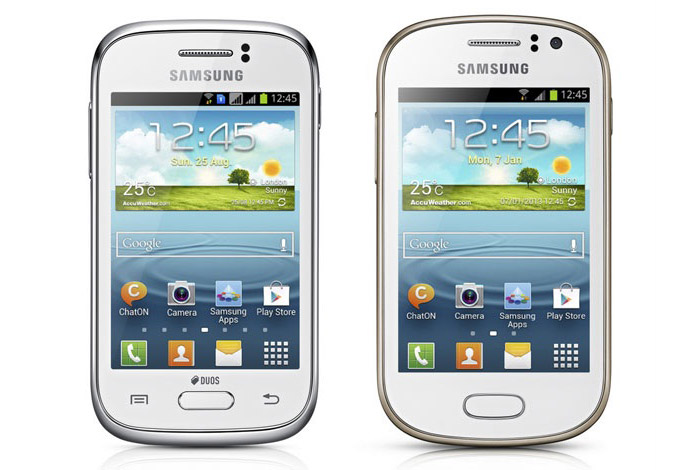 Samsung has been introducing new smartphones almost daily and today isn’t an exception. Let’s find out what the Korean company has for us this time.

The two Samsung newcomers are known as Galaxy Young and Galaxy Fame and as the names suggest both of them target younger people. Perhaps this is the reason why both smartphones do not belong to the high-end market segment but even then they do offer some nice specs.

The Samsung Young is built around a 3.27-inch HVGA display and sports a 1 GHz processor, 768 MB of RAM, 4 GB of internal storage (expandable via a microSD card), a 3 MP camera on the back, Wi-Fi, Bluetooth, Android 4.1 Jelly Bean and a 1300 mAh battery. Colors will include white, deep blue, wine red and metallic silver.

The Galaxy Fame has a 3.5-inch HVGA display, a 1 GHz chip, 512 MB of RAM, 4 GB of internal storage that you can expand using a microSD card, a front VGA camera, a 5 MP rear camera, Bluetooth, Wi-Fi, optional NFC, a 1300 mAh battery and finally Android 4.1 Jelly Bean. The Galaxy Fame will be available in pearl white and metallic blue.

There’s no word on pricing and availability but both smartphones including versions with two SIM cards should be on display at the upcoming Mobile World Congress 2013 in Barcelona, Spain later this month.