The ongoing IFA 2012 trade show in Germany has brought to life another Sony smartphone – the Xperia T – and as many analysts and Sony fans had expected Sony officially unveiled the smartphone at the German fair.

The Xperia T (also known as TX in some other regions) is officially based on a dual-core Qualcomm MSM8260A Snapdragon S4 processor running at 1.5 GHz and Android 4.0 with Android 4.1 Jelly Bean coming soon. Other specs include a 4.55-inch display at 1280 x 720 pixels, 1 GB of RAM, 16 GB of internal storage memory and a 1850 mAh battery. 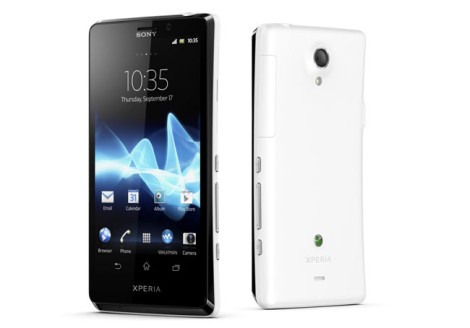 The Sony Xperia T also supports UMTS, HSPA+, MHL and NFC and there’s a 13 MP rear camera too that can record 1080p HD video. Up front you will find another camera that can record 720p HD video but takes lower quality pictures. The Xperia T weighs just 139 grams and is 9.35 mm thick.

Once on the market the handset will be available in black, silver and white colors. There’s a chance to see it in pink too but later on. Unfortunately pricing and the availability date are still unknown.