The BRAVIA ZX1 offers the ultimate in visual appeal with a 40-inch screen measuring a barely believable 9.9mm at its slimmest section. The compelling elegance of this wafer-thin display is hugely enhanced by a second master-stroke: there are no signal cables to spoil the perfectly poised design.

Instead, ‘BRAVIA 1080 Wireless’, a super-fast wireless connection, carries the audiovisual signal from the separate Media Receiver to the screen in real time. The visual simplicity is beguiling and creates an overwhelming impression of effortless sophistication.

Where conventional screens have CCFL (Cold Cathode Fluorescent Lamp) backlighting, the BRAVIA ZX1 is illuminated from the sides by LED arrays. BRAVIA Edge LED Technology is a key part of the advanced engineering behind this remarkable screen. 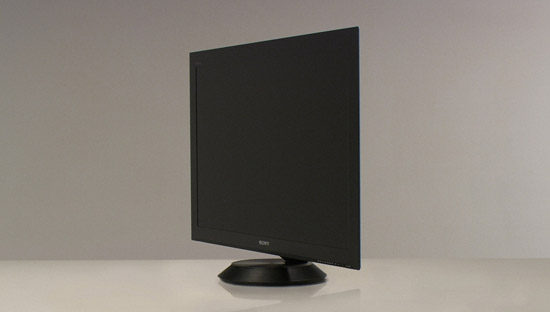 “There is nothing else like this,” said Hiroshi Sakamoto, Marketing and Product Planning Vice President, TV Marketing Europe, Sony Europe. “The BRAVIA ZX1 was conceived as a unique product, a true step forward, something that the most discerning consumer would instantly recognise as exclusive and desirable. Once you have seen it, other televisions no longer look the same.”

This is all possible because of the separation of the screen itself from the Media Receiver. TV signal cables and inputs from from other devices such as Blu-ray Disc™ players or PLAYSTATION®3 connect only to the Media Receiver, which can be kept out of sight. The video signal is sent to the screen via ‘BRAVIA 1080 Wireless’, a ground-breaking high definition, high-speed wireless connection capable of real time transmission of HD signals. For maximum convenience, the Media Receiver has an integral MPEG4 AVC-HD2 tuner as well as DVB-T and DVB-C3 digital broadcast and cable tuners. This means viewers can access free-to-air HDTV as well as standard digital broadcasts where these services are present.

Flexibility is an integral part of the BRAVIA ZX1’s appeal. It can be positioned either to emphasise its pure, free-standing design or wall mounted to draw attention to its ultra-flat profile. A specially made, super-slim wall mount option complements the BRAVIA ZX1’s very special character.

The Media Receiver can be anywhere in the room thanks to the RF (Radio Frequency) technology employed by the remote commander. Unlike the line-of-sight limitation imposed by standard infra-red remotes, RF is omnidirectional, so it will always work.

Naturally, the BRAVIA ZX1 delivers the superlative image quality expected of the brand. The underlying superiority of the BRAVIA ZX1’s picture is attributable to the centrepiece of BRAVIA quality: the BRAVIA Engine 2. This new version of the acclaimed Sony signal processor uses proprietary technology to improve every aspect of the image, frame by frame. BRAVIA Engine 2 is even better than its predecessor at reproducing realistic black, depicting objects with impressively lifelike depth and detail, removing blemishes or ‘noise’ from the picture, and delivering that trademark vibrant BRAVIA colour.

More advanced image processing technology ensures that the BRAVIA ZX1 handles fast motion sequences with ease, delivering a picture both crisp and smoothly lifelike. The key to this vital enhancement is Motionflow 100Hz with IB Reduction.

Motionflow 100Hz uses a unique algorithm to increase the frame rate of the TV picture to 100 fps (100Hz) by intelligently inserting additional frames to the picture. These additional frames compensate for scenes in which the 50 Herz frame rate is too slow to accurately and smoothly portray fast moving scenes such as sport, rapid panning of the camera or scrolling text on the bottom of the screen. Image Blur Reduction (IB Reduction) cleans up the original signal, sharpening each frame before it is used as the basis for creating new ones. The combined effect is exceptional clarity and motion which always looks convincing.

The BRAVIA ZX1 is highly versatile thanks to 4 HDMI™ inputs (1 x Display; 3 x Media Receiver) allowing it to connect to a sophisticated Audio-Visual system such as the Sony BRAVIA THEATRE HTP-BD3IS. It can even be used to control it, thanks to BRAVIA Sync technology. This uses the HDMI connection to transmit control information to other BRAVIA Sync-compatible devices. It can enable features like one-touch play and shut-down, which turns the whole Home Entertainment system on or off at once.

Finally, the Picture Frame mode means that the screen need never be blank. When not in use, it can display exquisitely detailed high definition images, either those pre-loaded into the Media Receiver, or the customer’s own selection via USB. In either case, the screen can enhance the decor exactly as desired.

First and last, the BRAVIA ZX1 is the perfect balance of high aesthetics and high technology.