If you still don’t  know about BRAVIA Internet Video, this is a service, which allow you to watch the programmes you missed on popular ‘catch-up’ TV services,  it also allows access to a whole world of free, on-demand internet content to explore from sharing websites such as YouTube , Dailymotion and many more. 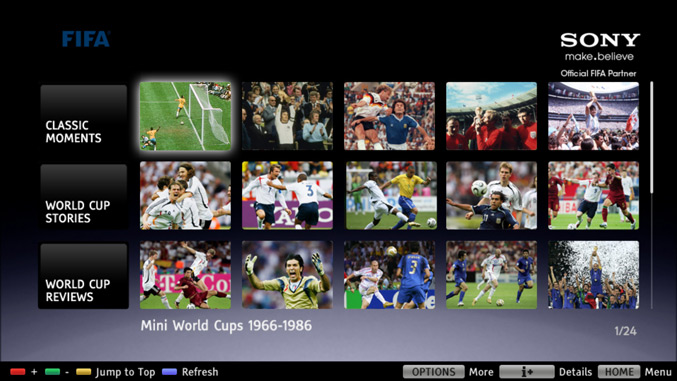 Initially this service is available in English only,  but from Sony promise, that French, Italian, German and Spanish versions of the service will be available soon.

Speaking on the announcement, Christian Luecke, Director Consumer Marketing TV & Online Marketing, Sony Europe, said: “We are very excited to offer a catalogue of the FIFA World Cup Collection to consumers in time for the 2010 FIFA World Cup. Thanks to BRAVIA Internet Video and our partnership with FIFA, we can make some of the greatest football moments come to life in consumers’ living rooms across Europe at the touch of a button.”

The catalogue is expanded continuously and includes the following: