For sharing, all 2009 JVC Everios make it easy to watch videos on an iPod® or iPhone® by exporting videos to the user’s iTunes® library with the new One Touch Export function provided by bundled software for Windows®. This joins the One Touch Upload function for uploading to YouTube™, for 2009 a feature available on all Everio camcorders, and One Touch DVD Creation function for easy archiving and sharing by disc, a long-time Everio feature.

All 2009 Everio camcorders are extremely compact, with the high definition models for the first time the same size as standard definition Everios that use the same media. In addition, more models offer color options for 2009, and the choice of colors has expanded to six. 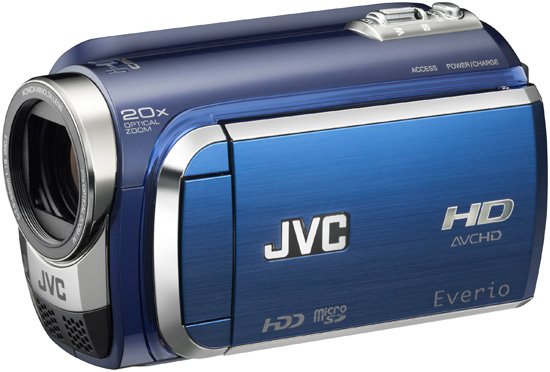 The 2009 JVC Everio line includes three HD Everio models that all record 1920 x 1080 full HD video. The GZ-HD300, with 60GB hard drive, and the GZ-HD320, with 120GB hard drive, offer HDD storage for extra-long recording times. The GZ-HM200 offers dual SD card recording, with continuous recording from one card to the next, and is one of the smallest and lightest full HD camcorders available.

In standard definition, there are three new Everio G series models – the 60GB GZ-MG630, the 80GB GZ-MG670 and the 120GB GZ-MG680. The Everio S series of memory camcorders includes two models – the GZ-MS120, with dual SD card slots, and the GZ-MS130, with an SD card slot and 16GB of internal flash memory. All dual memory models offer continuous recording. 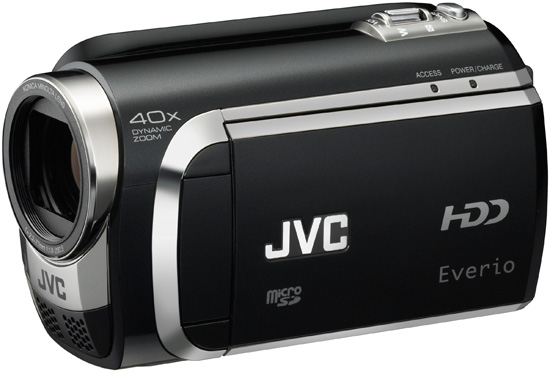 HD Everio models are also equipped with HDMI™ V.1.3 with x.v.Color™. Among the colors that the human eye can see, x.v.Color technology, based on the xvYCC color standard, can display 100 percent compared to about 55 percent with sRGB. So when connected to an x.v.Color compatible HDTV, the pristine world of high definition can be enjoyed to its fullest.

A new KONICA MINOLTA HD LENS, developed especially for Everio, provides a high-performance “eye” for the capture of Full HD resolution images, and also delivers a high optical zoom ratio of 20x which is among the highest for HD camcorders.

All HD Everios now feature the new AVCHD UXP mode with an unprecedented bit rate of up to 24Mbps to deliver more detailed, sharper images with less noise. UXP mode is ideal for storing to Blu-ray or an external hard disk drive. All the recording modes for HD Everio models – UXP, XP, SP, and EP – use Full HD 1920 x 1080 resolution. The 120GB GZ-HD320 can record up to 11 hours in the UXP mode and up to 50 hours in the EP mode. 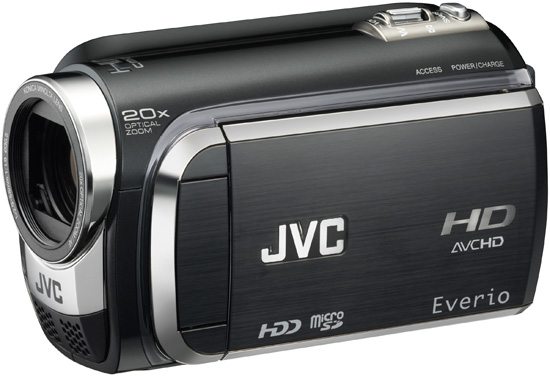 Further contributing to high quality video on all HD Everio models is Face Detection technology, which automatically detects faces within the image being recorded to accurately adjust focus and exposure for sharp, beautiful images.

The 2009 HD Everio line is comprised of the following models:

The 2009 JVC Everio G series line is comprised of the following models:

Everio S Series Camcorders
The Everio S series of memory camcorders includes two models for 2009, and both are dual storage memory models. The GZ-MS120 has a pair of SD/SDHC card slots while the GZ-MS130 offers a single SD/SDHC card slot and 16GB of internal flash memory. Both offer continuous recording – during recording, when one storage medium fills up, recording automatically switches to the other. When recording with the dual-slot GZ-MS120 in the highest quality mode (Ultra), recording capacity ranges from 3.7 hours using a pair of 8GB cards to 15 hours using two 32GB cards. In the lowest quality mode (Eco), recording time ranges from 20 hours to 80 hours. 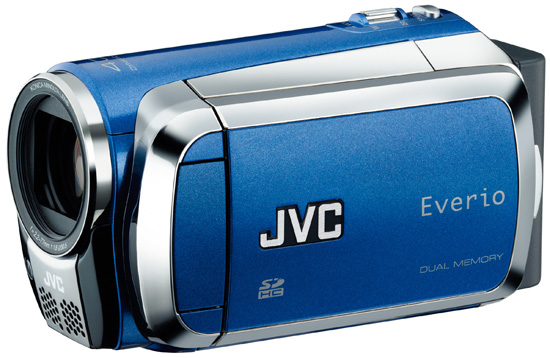 The 2009 JVC Everio S series line is comprised of the following models:

Everio Features
All 2009 Everios – HD, G series and S series – make sharing and watching videos easier than ever. New for this year is the One Touch Export function that allows Everio videos to be imported into iTunes® and loaded into an iPod® or iPhone®. All 2009 Everios also offer One Touch DVD burning and the One Touch Upload function that JVC introduced to users in 2008 as a new and convenient way to upload videos to YouTube™.

To use any of the three functions, simply connect Everio to a PC using the supplied USB cable. Then, the user chooses one of three buttons on the Everio: UPLOAD, EXPORT, or DIRECT DVD (DIRECT DISC for HD Everio models). Pressing the button will launch the appropriate Windows PC application that comes bundled with Everio, and the user simply follows the simple on-screen prompts. With just a few mouse clicks the process of uploading to YouTube™, exporting to iTunes®, burning to disc or transferring to an external hard disk drive will be completed. For uploading to YouTube™, the user can perform an in-camera edit of any length video to fit the 10-minute YouTube™ limit.

For disc based archiving, there is an alternative to using a PC. JVC offers the CU-VD50 Direct DVD Burner/Player as an option, which allows burning of Everio videos to a DVD disc without having to use a PC. When used with HD Everio, this solution can create AVCHD DVDs that are playable on many Blu-ray players. There are also JVC-recommended third-party peripherals, including a BD burner by LaCie, as well as hard disk drives by LaCie and Seagate® that provide a worry-free environment for high-capacity storage of recordings made using HD Everio.

The new Everio MediaBrowser software supplied with all Everio models is a Windows application providing an easy-to-search calendar-type graphical interface for indexing and finding video files. Thumbnail images of recorded videos and stills are superimposed on the calendar so it’s easy to see when any scene was recorded. The Everio MediaBrowser also allows easy playback, simple cut editing, and “Decomotion” to spruce up recorded footage with animated graphics for upload to YouTube™. It also supports Export to iTunes®, Upload to YouTube™, burning to disc or transferring to HDD. The Everio MediaBrowser software supplied with HD Everio models supports burning to Blu-ray disc in addition to DVD.

Another new feature found on all Everio camcorders is Digest Playback, which offers an easy and entertaining way to check the content residing on Everio’s HDD or SD/SDHC card. The function automatically selects highlight scenes from among the recorded content using JVC’s proprietary algorithm and plays back what looks like a “coming attractions” trailer for a movie. Sixty minutes of footage is condensed into five minutes of highlight scenes.

Other Everio features have been enhanced for 2009. Laser Touch Operation has been updated to allow control of zooming and recording using either the Laser Touch scroll bar or buttons next to the LCD screen, as well as by the standard zoom lever and REC button. And as before, Laser Touch makes it easy to browse through thumbnail images of recorded scenes and access menu selection. Power-linked operation, long offered by JVC, goes a step further this year. Simply opening the LCD monitor automatically opens the built-in lens cover and powers up the camcorder. Closing the LCD also closes the lens cover and shuts down the power. With Quick Restart, recording can start in about one second after the LCD is re-opened.

In addition to performance and convenience, the 2009 Everio line offers plenty of style and shooting comfort. A new design features elegant curves, a silver-framed LCD and a comfortable angled grip with a new dual use strap. The strap can be used in the usual camcorder fashion, supporting the user’s hand when shooting, or it can be extended and used as a wrist strap like the type on most digital still cameras.