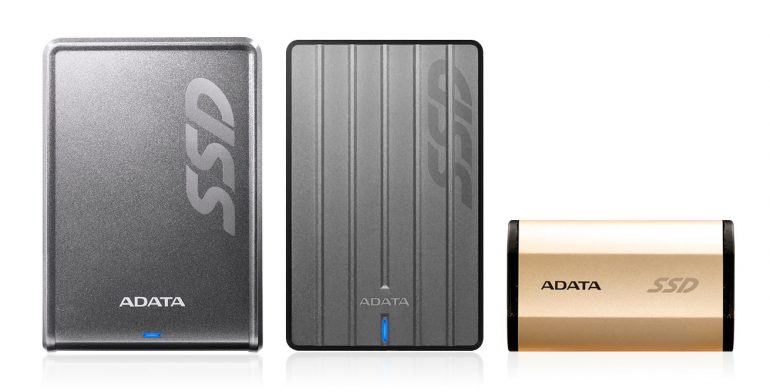 The Taiwanese memory maker ADATA has announced three new external solid-state drives – the SE730, SC660 and SV620. The three new models are all compatible with Windows, Mac OS and Android, which makes them versatile devices with excellent performance for people on the go.

ADATA says the SE730 model is the world’s most compact Type-C external SSD in the world. The device also sports IP68 dust, shock and water protection and uses a USB 3.1 Gen 2 connector to transfer data. The SSD is housed in a sturdy metallic chassis and weighs just 33 grams. In the performance department it reads and writes at 500 MB/sec.

The SC660 and SV620 solid-state drives are standard external solid-state drives. The SC660 model sports a shock-resistant metallic chassis that is just 9.6 mm thick. The drive reaches up to 410 MB/sec of read/write speed. The SV620 is a shock-resistant model that sits inside an enclosure with raised edges to protect surfaces against scratching. The drive also features a bright blue LED activity indicator to keep users always informed. Speed-wise the SV620 is as fast as the SC660 – that is, it reaches 410 MB/sec of read/write speed. In addition these two models are available in two capacity points – 240 GB and 480 GB.

The ADATA SE720 and SV620 solid-state drives are available now, while the SC660 will arrive in August. No word on pricing as of now.