“Canon is known within the professional photographer community for providing the right output tools to manage their photographic creations and the PIXMA Pro9500 Mark II Photo Printer continues to deliver on that tradition with its superior quality and archiveability,” said Yuichi Ishizuka, senior vice president and general manager, Consumer Imaging Group, Canon U.S.A. “Additionally, with the growing number of enthusiasts capturing professional-quality photographs with digital SLR cameras, it is only natural to want to maintain creative control over their photos by printing the images themselves on products like the new Canon PIXMA Pro9000 Mark II Photo Printer. These professional and emerging photographers understand and appreciate the creative control that Canon provides over image quality from capture to output.”

The printer’s matte black, photo black and gray inks reduce metamerism and provide high-density blacks and truly neutral monochrome prints. Metamerism is an effect in some printed “black-and-white” images where composite gray inks (achieved with combinations of cyan, magenta and yellow ink) make image areas appear a different color hue under different lighting conditions (such as sunlight, fluorescent light and incandescent light). This aberration is due to the differences in spectral reflectance properties of each of the composite colors.

The Canon PIXMA Pro9500 Mark II Photo Printer is scheduled to be available in May for an estimated selling price of $849.993.

The Canon PIXMA Pro9000 Mark II Photo Printer is scheduled to be available in May for an estimated selling price of $499.993.

A new Easy-PhotoPrint Pro feature incorporated into the PIXMA Pro models is Canon’s Ambient Light Correction technology which helps reduce the perceived color difference caused by different light conditions between printing and viewing or display environments. Compatible with Windows Vista OS, Ambient Light Correction allows users to optimize print color for the lighting conditions where the final print will be shown. Through the software, users can adjust color to various levels of lighting conditions from daylight at 6500K to a warm white fluorescent lamp at 3000K for optimal viewing.

Both the PIXMA Pro9500 Mark II and the PIXMA Pro9000 Mark II Photo Printers come bundled with Canon’s proprietary Easy-PhotoPrint Pro software and now with Adobe PhotoShop Elements, an user-friendly photo-editing software tool. Easy-PhotoPrint Pro, which is a software plug-in designed for Adobe applications such as PhotoShop CS, CS2, CS3, or PhotoShop Elements 6 along with Canon Digital Photo Pro (DPP) software, permits one-click image transfer, simple setting controls for color management and allows users to configure printer settings once for images on multiple sheets. A helpful feature, Easy-PhotoPrint Pro facilitates the printing of RAW image files (as a high quality TIFF or JPEG) without having to save directly from applications, like DPP.

The new Canon LiDE700F Color Image Scanner provides consumers with a high-speed scanning solution capable of capturing a letter-sized image – roughly the size of a large wedding photo or school portrait – at 300 dots-per-inch (dpi) in approximately 12 seconds. The scanner can capture one frame of a 35mm filmstrip at a maximum optical resolution of 9600dpi to help digitally archive customer’s older photographic film. Powered and connected via a single USB cord, the LiDE700F, includes a LED light source for low power consumption. Canon helps make scanning easier with Auto-Scan Mode, a one-touch solution where the scanner will automatically detect the type of document or image being scanned and adjust the setting accordingly. The scanner’s four easy buttons offer simple, single-touch operation for copying, scanning, and creating e-mail attachment/multi-page PDF files. The LiDE700F scanner is expected to ship to retailers in April at an estimated retail price of $129.993. 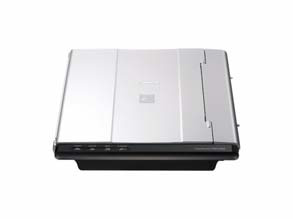