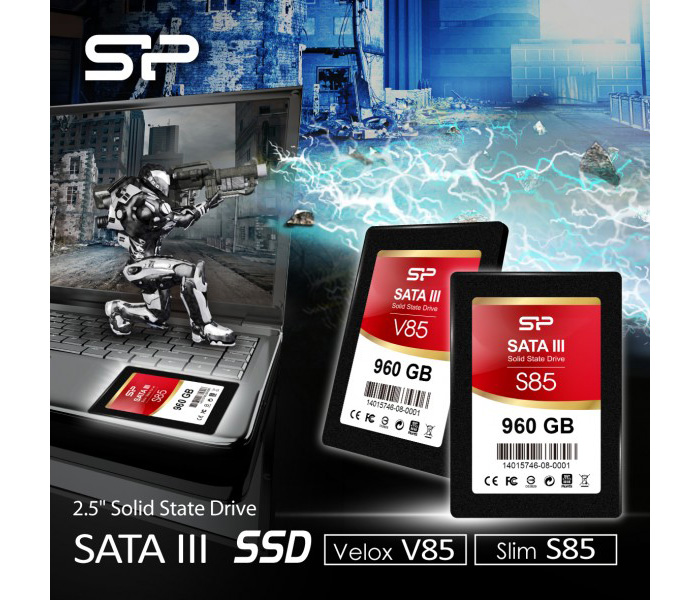 The maker of computer memory and SSDs Silicon Power has added two new solid-state drive lines to its product list. The new drive lines are called Velox V85 and Slim S85 and strangely enough they share the same specs.

Designed for gamers both series offer really nice SSDs with capacities of 240 GB, 480 GB and 960 GB. One such SSD measures 100 x 69.85 x 7 mm and weighs from 64 grams to 77 grams, depending on the capacity inside and hence the number of memory chips used. The lines support the latest SATA 3.0 standard as well as TRIM, SMART, ECC, RAID and NCQ and are shock-proof as they can sustain shakes of up to 20G and shocks of up to 1500G. Moreover thanks to the integrated Phison memory controller they reach read and write speeds of up to 560 MB/sec and 540 MB/sec, respectively, which automatically puts them in the high-end SSD market. The Velox V85 and Slim S85 come in the standard 2.5-inch form factor and are just 7 mm thick, which makes them suitable for use in ultrabooks.

By now you should wonder what the difference between the two lines is – well, the Velox V85 comes with a 3.5-inch mounting kit, while the Slim S85 does not offer this feature, which means that if you want to get one of these into a PC case that has just 3.5-inch slots, you should opt for the Velox V85.

Marketed as gaming-grade SSDs the Velox V85 and Slim S85 come with a 5-year warranty. Unfortunately there is no information on the pricing or availability of these SSD lines.