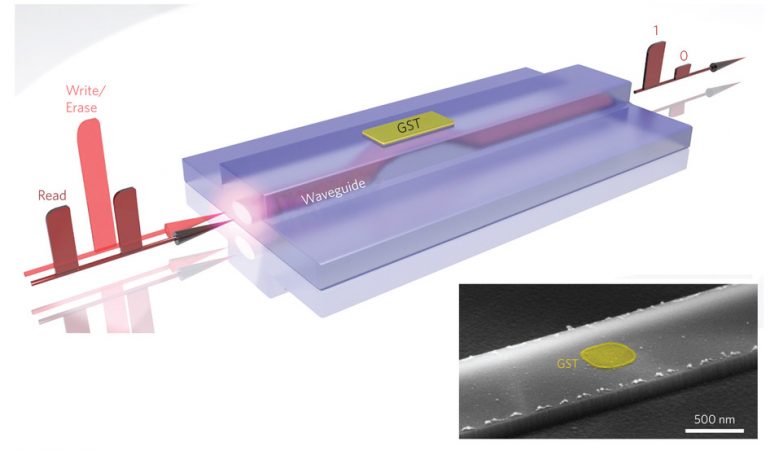 A team of German and British scientists, working for the Karlsruhe Institute of Technology and Oxford University have created the world’s first optical-only memory chip. This new technology has the potential to create super fast computers and memory drives that are tens of times faster and more spacious than current SSDs.

Most current memory relies on non-volatile electronic chips that have two major drawbacks – they are limited by heat and resistance, generated by colliding electrons. Light-based circuits do not have this problem but so far we have had nano-photonic chips from IBM which are volatile (they need to be powered). Now for the first time we have optical memory that is non-volatile.

To create this memory the scientists used a familiar light-based storage medium – DVDs. They used an alloy made from germanium, tellurium and antimony (GST) to store data. The alloy changes its structure when hit by a laser. The German-British team built a chip using “waveguide” technology that directs light through channels etched into a silicon-nitride material. The chip was coated with nanoscale GST, then blasted by a high-intensity laser through the waveguide channels. That changed the GST from a consistent crystalline structure into an amorphous blob, which was detected by another low-intensity laser and read out as data. The GST then transforms back to a crystalline state when hit by another high-intensity shot, which makes for a true rewritable device. By varying the intensity and wavelength of the lasers, the team was even able to store up to 8 bits of data in a single location, a big improvement over binary electronic devices.

Truth to be told, we won’t see this memory in use for quite some time since there’s a lot of work to be done. But the new technology has huge potential that might make future computers faster than we have ever imagined. Isn’t this really exciting?