Kingston Digital, Inc., the Flash memory affiliate of Kingston Technology Company, Inc., the independent world leader in memory products, today announced the release of the SSDNow V Series 40GB Boot Drive, the latest addition to its V (Value) family of solid-state drives (SSD). The Kingston® SSDNow V Series 40GB Boot Drive is one of the best and most cost-effective ways to accelerate any desktop’s boot, shutdown and application load times. It is available for as low as $84.99 after rebates (U.S. only) at e-tailer Newegg.com at launch.

“The SSDNow V Series 40GB Boot Drive offers instant performance enhancement coupled with reliability and lower power consumption at a fraction of the cost of a new system,” said Ariel Perez, SSD business manager, Kingston. “The 40GB Boot Drive is the latest offering in our V Series SSD line. It provides a low-cost upgrade solution that complements the installed hard-disk drive to extend the life cycle of existing desktop computers and workstations in homes and offices.” 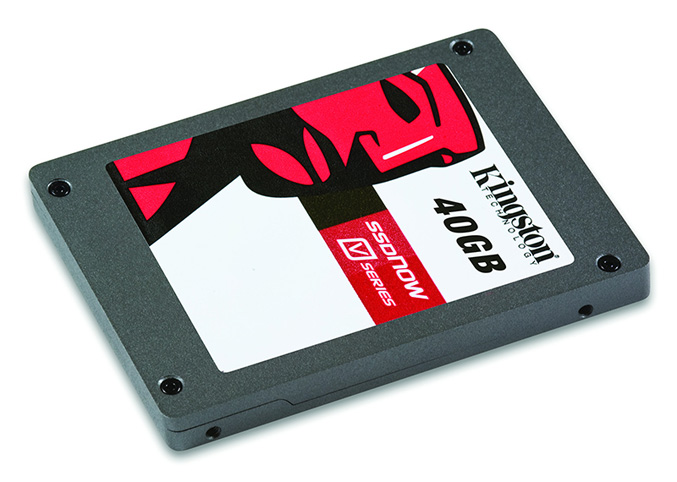 Using the industry-standard PCMark® Vantage Advanced HDD Suite, the 40GB Boot Drive received a score of 13,883, whereas a 7200RPM hard-disk drive attained a score of 3,708**. PCMark Vantage Advanced HDD Suite runs a series of tests such as Windows Vista® startup, importing photos, adding music to Windows Media Center and application loading. The score is an indicator of how many bytes were moved per second.

Kingston’s SSDNow V Series 40GB Boot Drive is designed for novice SSD users looking to increase their current desktop performance. As part of Kingston’s goal to provide an easy upgrade path for first-time SSD users as well as do-it-yourself system builders, the drive is also available with a bundle that includes cloning software, 2.5″ to 3.5″ brackets and SATA data and power cable extenders. The SSDNow V Series 40GB Boot Drive is designed for a desktop system to be used in conjunction with an existing hard-disk drive (HDD). A PC operating system and key applications reside on the SSD while all data such as documents, music, files and photos remain on the HDD.

The Kingston SSDNow V Series 40GB Boot Drive has an MSRP of $115.00 (U.S.) and will begin shipping on November 9, 2009. It is backed by a three-year warranty, 24/7 tech support and legendary Kingston reliability. For more information visit www.kingston.com.