New Energy Technologies, Inc. announced that, in addition to the active development of its MotionPowerTM technologies for generating electricity by harvesting the kinetic energy of moving vehicles, the Company is continuing to further advance the development of its tinted transparent glass SolarWindowsTM capable of generating electricity by coating glass surfaces with the world’s smallest known organic solar cells.

New Energy’s SolarWindowTM technology uses an organic solar array, which achieves transparency through the creative use of conducting polymers which have the same desirable electrical properties as the world’s most commercially popular semiconductor, silicon, yet boast a considerably better capacity to ‘optically absorb’ photons from light and generate electricity.

The Company’s ultra-small solar cells measure less than ¼ the size of a grain of rice, are fabricated using environmentally-friendly hydrogen-carbon based materials, and successfully produce electricity, as demonstrated in a published peer-reviewed study in the Journal of Renewable and Sustainable Energy of the American Institute of Physics. 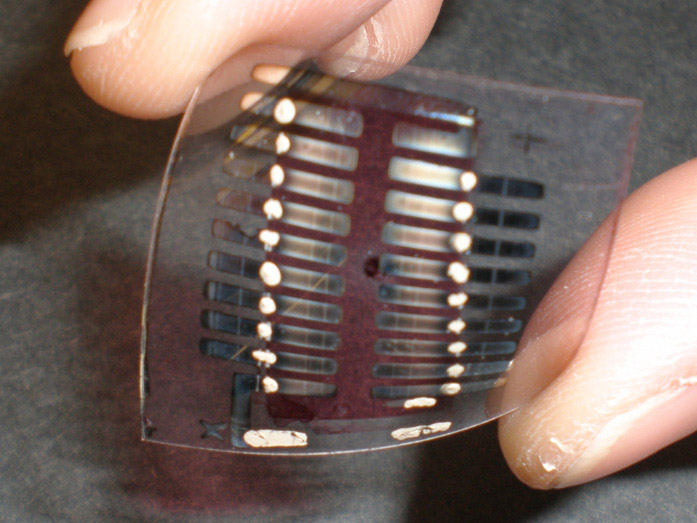 “I’m particularly impressed by the potential application of this technology in areas where direct exposure to sunlight is limited or unavailable, since these ultra-small solar cells have demonstrated a special ability to generate electricity in both natural and artificial light conditions.”

Unlike other solar technologies, New Energy’s ultra-small solar cells generate electricity not only from the visible light spectrum found in sunlight but also by using the visible light found in artificial light, such as fluorescent lighting typically installed in offices and commercial buildings. Commercially, while the majority of today’s solar cells can only be installed where direct sunlight is available, New Energy’s ultra-small solar cells can be installed anywhere that direct sunlight or artificial lighting such as fluorescent systems emit visible light.

New Energy’s SolarWindowTM technology makes use of ultra-small solar cells which allows for the fabrication of solar arrays on a broad range of substrate materials such as glass, plastic, and even paper. Made of natural polymers which can be dissolved into liquid for easy application, these ultra-small solar cells do not require expensive and complicated high-temperature or high-vacuum production techniques common to other solar coatings.

Currently available solar cells are largely made of silicon wafers, an expensive and brittle material that can limit their commercial usability. Other newer generation, lower cost flexible thin film solar materials such as amorphous silicon, copper-indium-gallium-selenide, and cadmium telluride often require high-vacuum and high-temperature production techniques, and are many times thicker than New Energy’s ultra-small solar cells. This generally limits the application of such thin films primarily to stainless steel, an expensive substrate material with limited prospects of delivering transparency.

The superior optical absorption properties of New Energy’s ultra-small solar cells enables development of an ultra-thin film, only 1/1000th the thickness of a human hair, or 1/10th of a micrometer. Conventional thin films are exponentially thicker, measuring several micrometers thick and inhibiting transparency. In photovoltaic applications such as see-thru windows, where transparency is a primary concern, today’s thin film solar cells simply cannot be utilized to produce a transparent solar window for application in homes, offices, and commercial buildings.

There are nearly 5 million commercial buildings in America, according to the Energy Information Administration, and more than 80 million single detached homes.