TDK Corporation announced today the launch in late May 2009 of the SDG2A series of serial ATA(SATA) II compatible industrial solid state drives(SSDs) with a maximum memory capacity of 64 GByte.

These products are industrial SATA Flash discs equipped with GBDriver RS2 SATA controller ICs developed by TDK. They support high-speed access with an effective read speed of 95 MByte/second and effective write speed of 55 MByte/second. They also feature powerful error correction capabilities scalable to 15-bit/sector ECC(error correction code), providing high levels of data reliability. The use of an internal power supply protection function prevents errors in the event of a power interruption. These SATA drives are also equipped with an auto-recovery function that automatically recovers data when read disturbance errors occur from repeated reading of data, making them ideal for use on automotive application such as car navigation systems. 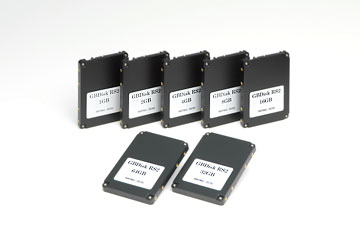 TDK has achieved a substantial improvement in the life spans of semiconductor memory storage devices. An advanced static wear leveling function developed by TDK equalizes data writing among all of the Flash memory blocks, maximizing the life span of the memory. SMART(self-monitoring and analysis reporting technology) data makes it possible to determine the number of times each memory block is erased, facilitating quantitative assessment of silicon disc life spans in real time.

The drives also feature an advanced encryption function using the 128-bit AES encryption that has been registered as United States Department of Commerce Federal Information Processing Standards FIPS PUB197. Data is automatically encrypted before writing to the Flash memory, preventing data tampering and leaks. A high level of storage security is provided to prevent unauthorized copying and other data risks by using both ATA standard security functions and an original TDK password lock function.