Sky announced that it will launch Sky 3D, Europe’s first dedicated 3D TV channel, this April. As part of the final preparations for this ground-breaking launch, Sky will preview the new service with a world first this Sunday (31st January 2010), becoming the first TV company anywhere to broadcast a live 3D TV sports event to a public audience. The Premier League clash between Arsenal and Manchester United will be filmed in 3D and broadcast over the Sky platform to selected pubs around the UK and Ireland, with their customers becoming the first audiences anywhere in the world to experience live Premier League in 3D.

To support this landmark broadcast, the nine pubs – located in London, Manchester, Cardiff, Edinburgh and Dublin – have been kitted out specially with some of the first ‘3D Ready’ TV sets to reach the UK and Ireland. As 3D TVs become more widely available, Sky will roll out its 3D channel to hundreds of pubs from April, allowing football fans across the country the opportunity to experience a live Premier League match in 3D each week.

Once 3D TVs begin to reach the consumer market later this year, Sky will then make Sky 3D available to all Sky+HD customers, giving millions of people the opportunity to watch a wide range of content in 3D, including movies, sport, documentaries, entertainment, and the arts. 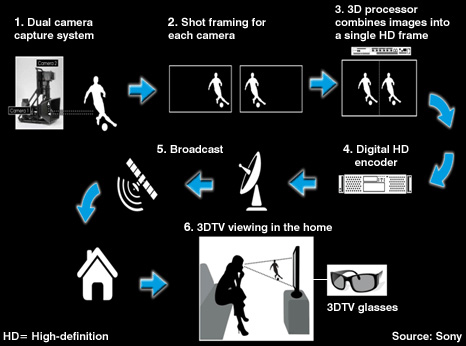 Sky 3D works with all existing Sky+HD boxes and will initially be introduced at no extra cost for customers who subscribe to Sky’s top TV package and the Sky HD pack. Sky 3D will also be compatible with all 3D Ready TVs coming to the UK and Ireland this year, including all models from Sony, Samsung, LG and Panasonic.

To make the 3D preview a reality, Sky Sports will produce two edits of its live coverage of Sunday’s game at the Emirates Stadium, one for its HD channel feed and another dedicated to 3D. Eight specially engineered 3D camera rigs will house sixteen of Sky’s high definition cameras, to provide comprehensive stereoscopic coverage from all angles. The 3D broadcast will be supported by Sky’s dedicated 3D production team and purpose built 3D outside broadcast truck, which will enable live mixing between camera positions, slow motion replays and the use of innovative 3D graphics. There will also be a dedicated commentary team to support the 3D edit.

Sky’s commitment to launch a dedicated 3D TV channel follows a number of 3D ‘firsts’ achieved over the last couple of years. In December 2008 Sky was the first UK broadcaster to demonstrate 3D through a domestic TV and then went on to broadcast an exclusive demonstration of a Keane gig in 3D live over its satellite platform and offering the UK’s first ever live public demonstration of 3D – a recorded performance of Swan Lake by English National Ballet – at the Hay Festival.

Jeremy Darroch, Sky’s Chief Executive, said: “3D is without doubt one of the most talked-about developments in television for many years. Sky has always innovated to bring customers the best possible viewing experience, so we fully intend to take the lead in bringing the spectacle of 3D to the UK and Ireland.”

Gerry O’Sullivan, Sky’s Director of Strategic Product Development, said: “2010 is the year for 3D TV. People have already embraced 3D cinema and because Sky’s 3D service uses the same kind of technology, we’re confident there will be demand for sport, movies, concerts and drama in 3D. The good news is that all Sky+HD customers already have the set-top box they need to enjoy 3D, meaning they simply need to buy any new 3D TV, all of which will work seamlessly with Sky’s ground breaking new service.”

Barney Francis, Managing Director of Sky Sports, added: “Sky Sports has a proud history of innovation, from the simple clock and scoreline in the comer of the screen through to high definition. It’s fitting that we’re pioneering this new, revolutionary development in broadcasting.”