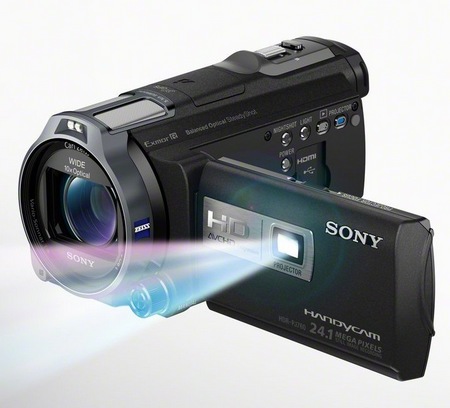 The Japanese electronics giant Sony has released two new camcorders that should strengthen the company positions on this market.

Belonging to the Handycam line, the two new digital devices carry the HDR-PJ760V and HDR-PJ710V model numbers and support full HD recording. The built-in LED projector allows you to view the recorded information on any wall or other flat object that has a large homogeneous structure. The maximum image diagonal in this case is 100 inches, while the working resolution is 640 x 360 pixels.

The Sony HDR-PJ760V arrives with 96 GB of internal storage, while the junior HDR-PJ710V model has just 32 GB but they both feature built-in MS and SD card slots for future expansion. There’s also the Exmor R CMOS sensor that allows recording in low light conditions with approximately two times greater sensitivity than conventional sensors. The two new camcorders also include the ClearVid filter for better recording and the BIONZ graphics processor in addition to the 1920 x 1080 Full HD resolution and the 24.1 MP sensitivity for taking pictures.