Canon has decided to celebrate the 25th anniversary of the release of its first EOS SLR with the launch of a new full-frame DSLR camera. The newly announced EOS 5D Mark III camera is not a replacement to the older Mark II model – instead it is an updated variant meant to sit between the Mark II and the upcoming EOS-1DX camera.

Seen on the outside (picture courtesy of Engadget) the new EOS 5D Mark III does not seem much different than its predecessor, save for a new name badge, improved weather and dust resistance and some slight tweaks to its info display and buttons on the back. 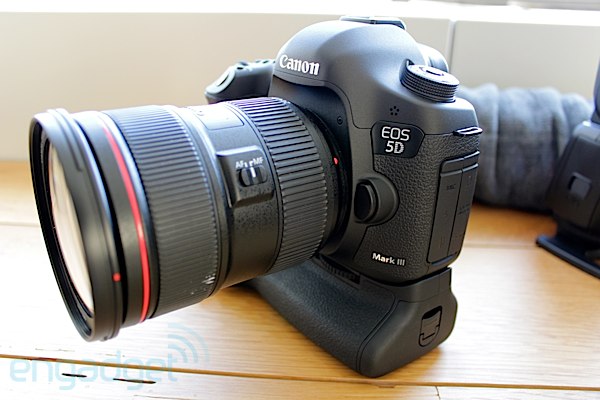 The new camera also allows you to control and monitor your audio levels during filming in real time, being the first EOS-series DSLR to come equipped with a headphone jack (!) – something that’s been sorely missing in the world of ILC cameras.

As to processing speed the Digic 5+ is rated 30 percent faster than the 5 and a healthy 17 times quicker compared to the fourth version of the processor found in the Mark II. With its CMOS sensor the EOS 5D Mark III also takes JPEG shots that are two stops cleaner than the ones Mark II offers and video is also noticeably smoother with less artifacting.

The camera also offers a “comparative playback function” via a button that allows you to view two photos (and their metadata) side by side on the LCD to see how you are doing in the shooting department. The Mark III is also capable of shooting HDR images, with your choice of up to seven exposures (up to three stops over and under) to work with. Other features new to this tech wonder are “in-camera RAW processing, Scene Intelligent Auto mode, two forms of movie compression (ALL-I and IPB), and support for high-speed UDMA 7 Compact Flash memory cards.” Video however is limited again to 29 minutes 59 seconds – the Canon way of avoiding the European HD camcorder taxes.

The EOS 5D Mark III should be commercially available at the end of March priced at 3500 USD for the body only and 4300 USD as kit with an EF24-105mm f/4L IS USM zoom lens. Also available at launch will be Canon’s new 630 USD Speedlite 600EX-RT and its 470 USD Speedlite Transmitter ST-E3-RT. In April photography aficionados will also be able to pick the 390 USD GP-E2 GPS receiver, the 850 USD WFT-E7A Wireless Transmitter, and of course, the 490 USD BG-E11 Battery Grip (which happens to be weather resistant and with room for two batteries).

Canon has also decided to reduce the price of the Mark II but right now it is not known by how much.