Nikon Corporation is pleased to announce the introduction of its newest FX-format digital SLR flagship for fast response and high light sensitivity: the Nikon D3S.

Standing on the shoulders of the world-renowned D3, the D3S takes the potential of Nikon’s proprietary FX format to incredible new levels designed to meet or exceed a professional’s high standards. The D3S delivers ISO 200 to ISO 12800 as standard, with the excellent noise control and wide dynamic range that the D3 is famous for. This provides photographers of any discipline with additional latitude to achieve quality images in most lighting situations. When needed, ISO sensitivity can be expanded from Lo 1 (ISO 100 equivalent) up to Hi 3 (ISO 102400 equivalent), making a significant difference in extremely low-lit shooting scenarios and other situations where faster shutter speeds or more depth of field is required. 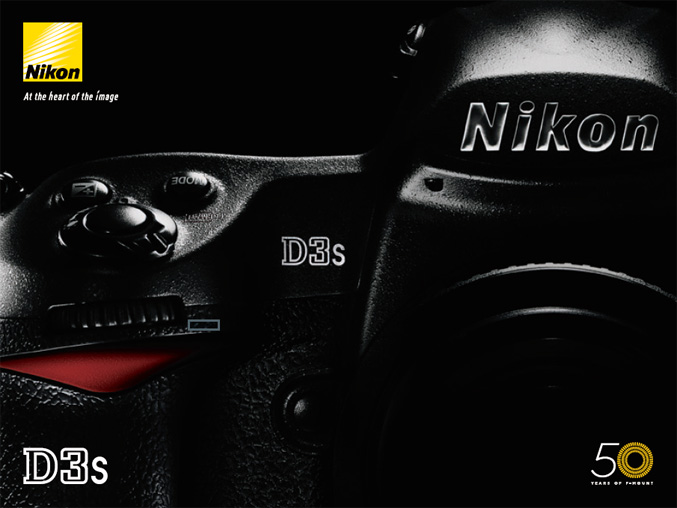 In a first for an FX-format flagship, the D3S incorporates the HD-quality D-Movie function, letting users take full advantage of the wide dynamic range and high ISO performance, including the breakthrough High-Sensitivity Movie mode. The D3S’s D-Movie also offers compatibility with an external stereo recording microphone, as well as convenient in-camera editing functions such as the ability to select the starting or ending points in order to trim D-Movie footage, as well as the option to save selected movie frames as JPEGs. The D3S shoots approximately 9-frames-per-second high-speed continuous shooting in FX format and 11 fps in DX format, with a buffer twice the size of the D3’s. These features, along with a 0.04-second* shutter release time lag and improved AF accuracy work seamlessly for lightning-fast responses. Various improvements in ergonomics, operation, and reliability, such as image sensor cleaning, will help photographers focus on shooting under any conditions. When combined with state-of-the-art NIKKOR lenses and the Nikon Total Imaging System, which includes Nikon Speedlights, wireless transmitters and various software, the D3S delivers exceptional quality and versatility for an unprecedented variety of professional and personal assignments. 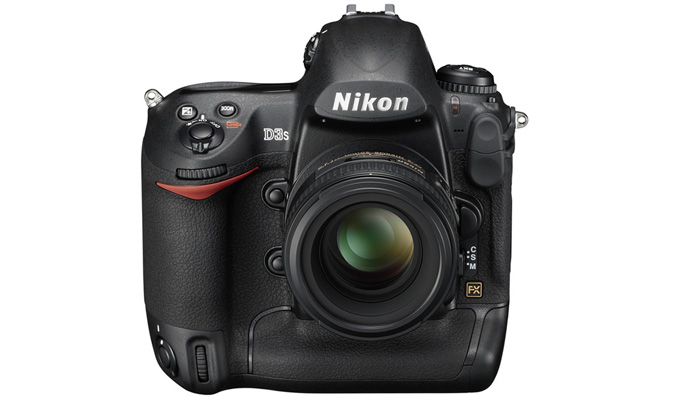 Professional photographers can now rely on ISO 200 to ISO 12800 as the professional standard of image quality for their assignments — an incredible advantage when shooting indoor sports, stadium events at night, dimly lit spot news or any other shooting situation where light is limited and Speedlights are not applicable. Shooting at ISOs as high as 12800, the D3S can take commercial-quality, tack-sharp images in low light at action-freezing shutter speeds — a capability that will open a new world of photographic opportunities. When needed, the D3S expands to the amazing ISO equivalent of 102400, still revealing colors and details even in extremely low-lit places where human eyes may find it difficult to discern objects. This exceptional low-noise performance also applies to D-Movie capture, which creates new potential for multimedia projects and assignments.

The D3S’s image sensor has been completely redesigned from the one utilized in the D3. This new sensor’s inner structure has been further optimized, with the pixel count and large pixel pitch maintained for even greater latitude in high ISO performance. As a result, the D3S captures and renders light in ways that no other ordinary digital SLR cameras have yet achieved, with a significantly higher signal-to-noise ratio and a wide dynamic range for unmatched image quality for both still images and movies throughout the broadened ISO sensitivity capabilities. 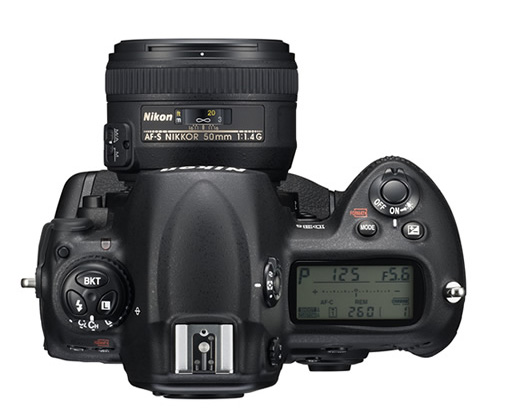 From well-lit scenes to extremely low-lit situations, the D3S’s D-Movie mode delivers unique versatility. The newly refined D-Movie offers HD quality (1,280 x 720 pixels) Motion-JPEG movies at 24 fps. By controlling the aperture from the widest f-stop to the smallest, the large FX-format sensor renders low-noise images with beautiful bokeh effects from a large selection of NIKKOR lenses. High-Sensitivity Movie mode allows users to shoot at up to ISO equivalent of 102400 in places too dark to see clearly with their own eyes. D-Movie footage is easy to trim in-camera by simply selecting the starting or ending point. An extra bonus for sports and spot news photographers is the ability to save selected movie frames as JPEGs for immediate print and web publishing needs. The D3S has both an internal monaural microphone and an external stereo microphone input, enabling higher fidelity audio recording. 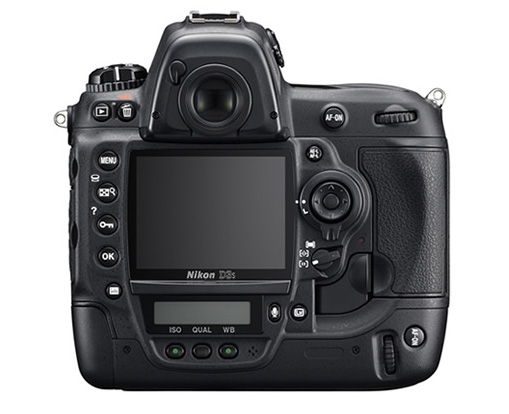 Another important improvement from the D3 is the employment of the Image Sensor Cleaning function, which generates vibrations at four specific frequencies to optimize dust removal. This function can be set to operate automatically when the camera is turned on and off, or manually.

The D3S corrects color fringes caused by chromatic aberrations that, in some instances, can appear at the edges between differing subject elements. Because lateral chromatic aberrations are corrected regardless of lens type — whether telephoto, wide-angle, non-CPU and other types of NIKKOR lenses — this important aspect of the D3S contributes substantially to the highly refined, edge-to-edge image integrity that professionals demand.

Nikon’s Active D-Lighting automatically regulates the dynamic range of high-contrast scenes, pulling out shadow details and preserving highlights while maintaining proper contrast. The D3S allows photographers to choose from six Active D-Lighting settings, including the newly added Auto and Extra high, as well as High, Normal, Low and Off. You can also bracket Active D-Lighting strength levels up to five frames and select the best rendition afterwards.

Speed and readiness throughout the workflow

The D3S optimizes workflow speed and fluidity throughout the entire shooting process. Start-up time is approx. 0.12 seconds* and release time lag is minimized to approx. 0.04 seconds*, exactly as fast as the D3, but the D3S’s increased buffer memory is twice as large as that of the D3’s. In addition, the D3S’s autofocusing, image processing, memory card access and recording, USB interface and optional wireless transmitter all work together to keep professional photographers focused and moving forward. And for sport and spot news photographers, many of the D3S’s JPEG files are print-ready with little or no post-production: an extra edge when time is short. * Based on CIPA Guidelines.

The D3S’s continuous shooting rates are impressive, but what makes them truly unique is that the D3S’s powerful stepping motor allows for a steadier delivery of fast continuous shooting speeds at a wider range of aperture settings than lesser cameras can achieve. Professionals will now have greater control and fewer limitations when creating the images they desire. With the DX crop, photographers can also add a 1.5x picture angle and a faster frame rate to their arsenal. Furthermore, the factory-installed buffer memory is twice the capacity of the D3, dramatically increasing the power of continuous shooting.

The D3S’s strategically positioned 51 AF points deliver faster focus, even with quick and/or erratic subject movement. The 15 cross-type sensors in the center of the frame maintain the same outstanding performance with any AF NIKKOR lens f/5.6 or faster. There are four Dynamic-area AF options, including 51 points (3D-tracking), which accurately follows your subject by shifting focus points using color and brightness information from the Scene Recognition System. This gives users an extra advantage when composition is important but your subject’s movement is extremely erratic. Single-point and Auto-area AF modes are also available.

The D3S’s large prism gives you the FX-format visual advantage when you shoot. Not only is the viewfinder image larger and brighter, the focusing screen is also carefully designed to help you more intuitively sense sharp focus, be it manual or autofocus.

For the reliability professionals demand, the shutter of the D3S has been tested for up to 300,000 cycles in fully assembled cameras under rigorous conditions. The ruggedly constructed D3S employs a strong yet lightweight magnesium alloy for its body, exterior cover, chassis and mirror box. Furthermore, a comprehensive series of O-rings and other specialized seals, combined with additional Nikon engineering, protect the D3S against invasive moisture, dust and even electromagnetic interference.

The D3S lets you designate each card slot for certain tasks: record two full CF cards of data sequentially for a large amount of storage, record the same data onto two cards (backup), record RAW and JPEG simultaneously onto separate cards, and transfer data from one card to another. You can also designate the slot for data-heavy D-Movie recording.

The D3S uses an EN-EL4a rechargeable battery. Power consumption and power management systems have been engineered for greater operating efficiency, so you can expect long battery life, shooting up to 4,200 images* per charge.

Photographers can select “Q” on the release mode dial to substantially reduce the sound of the camera’s mirror-down during shooting. This is particularly useful when shooting in restrictive conditions such as when photographing theatrical performances or wildlife.

The D3S’s large, high-resolution LCD monitor delivers bright, crisp image playback with up to 27x enlargement for immediate and precise image confirmation. Each LCD is covered with scratch-resistant tempered glass and individually calibrated and fine-tuned at the factory to ensure consistent performance.