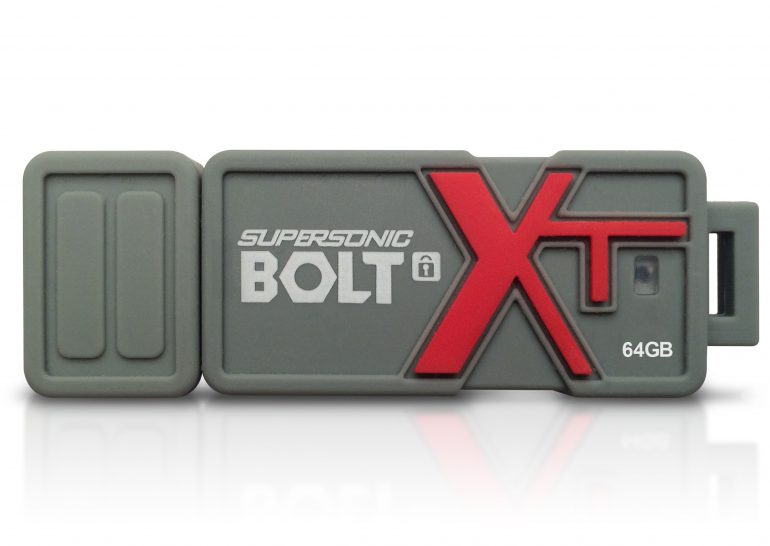 Have you ever copied important files on a USB flash drive only to see later that they have mysteriously disappeared? The feeling is not nice – you want to have your essential information back, while fighting disappointment, anger, frustration and confusion. What do you do then – you get a safer and better USB flash drive like Patriot’s new Supersonic Bolt XT USB flash drive that not only comes with the latest technologies but also with some security features too.

There is a lot to say about the Supersonic Bolt XT USB flash drive but you can combine all its features in two words – performance and security. As you can see the new flash drive belongs to the company’s high end Supersonic line and to be there it must have advanced functionality. It does have it – the Supersonic Bolt XT USB flash drive offers tons of protection. The drive uses built-in FIPS 197-compliant hardware-based 256-bit AES security and if something happens it has the capability to lock down and overwrite itself after 10 consecutive failed password attempts. Security is not all about hardware and this is the reason why the Supersonic Bolt XT comes inside a rugged, rubber-based chassis that protects the hardware and your data from accidental drops, bumps and other similar events.

The Supersonic Bolt XT USB flash drive does deliver in the performance department too. The drive supports the latest USB 3.0 standard and reaches data transfer speeds of up to 150 MB/sec when reading and up to 30 MB/sec when writing. Available in 16 GB, 32 GB and 64 GB capacities for all kinds of users, the new Patriot flash drive is compatible with older USB 2.0 ports as well.

“Patriot Supersonic Bolt XT offers user superior transfer speeds with security to offer peace of mind,” said Meng J. Choo, Product Manager at Patriot. “The rugged housing and 256-bit AES security protects priceless data. The large capacity and fast transfer speeds allow users to take their data with them without having to worry about their security being compromised.”

The Patriot Supersonic Bolt XT USB flash drive is compatible with all Windows versions starting from Windows ME and newer, Linux 2.4 and later, Mac OS 9.0 and later and sells for USD 49.99 (16 GB version).