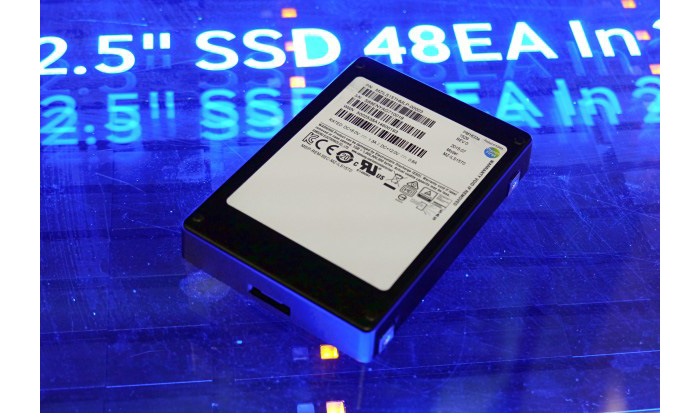 Just a few days ago Samsung announced its hot, new 256 Gb 3D V-NAND memory and the company seems to be already getting benefits from its tech discovery – at the Flash Memory Summit in California Samsung has announced the world’s most spacious storage device called PM1633a.

The PM1633a is a solid-state drive that packs almost 16 TB of data inside. As a comparison the newest hard drives top at 10 TB of data, while also being slower. The new device is also a 2.5-inch SSD model and includes between 480 and 500 of Samsung’s new 256 Gb memory chips. The actual capacity is 15.36 TB, rounded up for some reason to 16 TB, but even then this capacity impresses. Samsung has also demonstrated a server with 48 of these new SSDs, offering 768 TB of space and performance rated at 2 million IOPS. Modern desktop SSDs reach just 70-90 thousand IOPS so you can imagine how fast this SSD is.

The price of the new PM1633a is a secret as of now but given the tech specs we can easily say the drive will be obscenely expensive. In fact first price estimates put it at around USD 8000 but paying this much will make you an owner of the world’s most spacious and fastest storage device so it might be worth it.