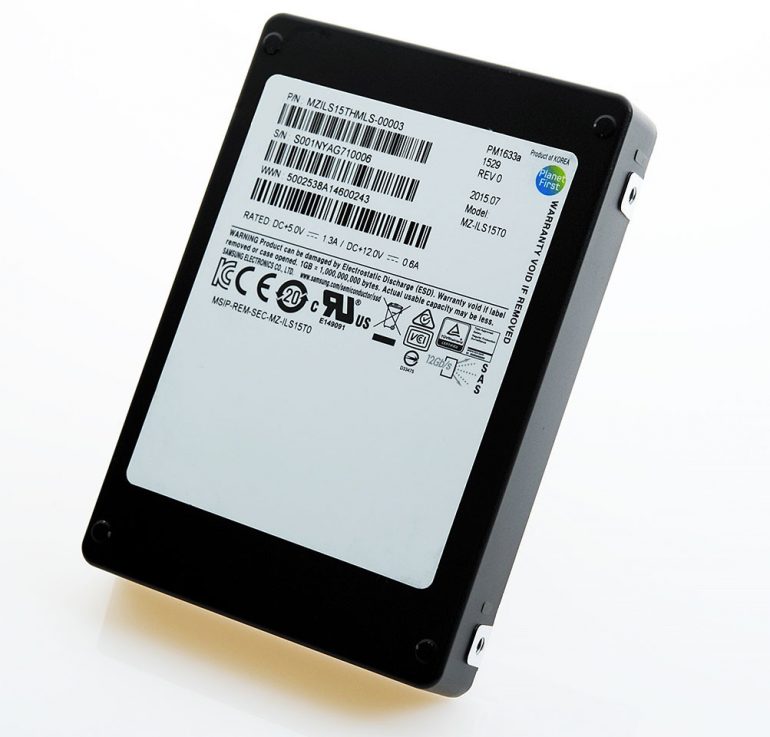 Samsung Electronics has presented a new solid-state drive that has every right to be called the world’s highest capacity SSD. The device is called PM1633a and features a capacity of 15.36 TB. The new SSD is based on a 12 Gb/sec Serial Attached SCSI (SAS) interface for use in enterprise storage systems. In addition to this the PM1633a comes in a 2.5-inch form factor, which allows enterprise storage managers to fit twice as many drives in a standard 19-inch 2U rack, compared to an equivalent 3.5-inch storage drive.

“To satisfy an increasing market need for ultra-high-capacity SAS SSDs from leading enterprise storage system manufacturers, we are directing our best efforts toward meeting our customers’ SSD requests,” said Jung-bae Lee, Senior Vice President, Memory Product Planning and Application Engineering Team, Samsung Electronics. “We will continue to lead the industry with next-generation SSDs, using our advanced 3D V-NAND memory technology, in order to accelerate the growth of the premium memory market while delivering greater performance and efficiency to our customers.”

The Samsung PM1633a SSD consists of 512 Samsung 256 Gb V-NAND memory chips, which are stacked in 16 layers to form a single 512 GB package. The SSD includes 32 such NAND packages to reach the 15.36 TB capacity. Utilizing Samsung’s 3rd generation, 256-gigabit (Gb) V-NAND technology which stacks cell-arrays in 48 layers, the PM1633a line-up provides significant performance and reliability upgrades from its predecessor, the PM1633, which used Samsung’s 2nd generation, 32-layer, 128Gb V-NAND memory. The new SSD reaches random read and write speeds of up to 200 000 IOPS and 32 000 IOPS respectively and delivers sequential read/write speeds of up to 1200 MB/sec. The drive boasts 16 GB of DRAM cache and can sustain one complete drive write (15.36 TB) per day with no problems so it does offer great reliability. This being said, the PM1633a can write from two to ten times as much data as typical SATA SSDs based on planar MLC and TLC NAND flash technologies.

CSI in the Automotive World