Force Sensing technology simulates the authentic aircraft controls typically found in modern fighter jets by responding to the pressure exerted on the stick while it remains still at all times. With the stick remaining still and in-game movements reacting only to the player’s pressure, gamers can command with extreme precision resulting in realistic, fatigue free response. In addition to the Force Sensing Shaft and Twist Rudder Controls, the X65F affords gamers the opportunity to adjust multiple aspects of the Force Sensing system on-the-fly, including adjustments for each axis of the stick, resulting in customized control without the need to interrupt game play. 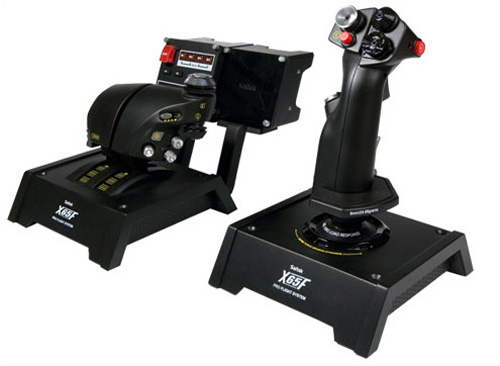 Darren Richardson, President and Chief Executive Officer of Mad Catz commented, “The release of the new X65F demonstrates our intent to deliver industry-leading realism in control systems and accessories for simulation game enthusiasts. We believe the X65F is an ideal showcase for the innovation and engineering prowess of our Saitek engineering team and believe that consumers will respond enthusiastically to the new technology utilized in this product and look forward to its release in time for the holiday season.”

Exhibiting state-of-the-art technology along with premium build quality, the X65F is constructed from metal, with a high-grade steel shaft containing no moving parts, thus increasing the product’s longevity.

Featuring a separate Dual Throttle with rear Switch Panel controls, the system allows for finer precision when controlling a twin engine jet and can be locked together when flying single engine aircraft. Both the Stick and Dual Throttle Control Unit feature a comprehensive array of hats, buttons, triggers and switches allowing total control of the most complex of aircraft and when combined with the additional 5 control switches, Force-Sensing strength selection, mode indication and mounting points for Saitek Pro-

Flight Instrument Panels located on the rear panel, gamers have access to an astonishing 608 possible commands without the need to ever remove their hands from the X65F controls!

Ideal as the centrepiece of a premium professional flight simulation installation, the X65F has been designed to seamlessly integrate with other products in the Saitek Pro-Flight range, offering full compatibility with the Pro-Flight Instrument Panel and Pedal System (both sold separately) to deliver an all encompassing flight experience.

The X65F ships with Saiteks proprietary SST software, allowing users to reconfigure multiple control aspects of the system to ensure compatibility with virtually all PC flight simulation or flight action titles. In addition, the X65F is fully compatible with Windows™7, Vista™ and XP™ operating systems.

The Saitek Pro Flight X65F Control System is expected to be available across North America and various European territories beginning in the fall of 2009 retailing for an SRP of: $399.99 / £349.99.