Expanding its line of premium music game controllers to Guitar Hero® gamers on Wii™, Logitech today introduced the Logitech® Wireless Guitar Controller for Wii™ and the Logitech® Wireless Drum Controller for Wii™. Licensed by Activision Publishing, Inc., both controllers feature the high-quality materials that you’d expect to see in real guitars and drums, and are designed to let you take advantage of all the latest features of Guitar Hero games including Guitar Hero® 5 and the soon-to-be released Band Hero™.

“Logitech’s premium guitar and drum controllers have made it easier for Guitar Hero gamers to get into the music with even more realism,” said Ruben Mookerjee, Logitech’s director of product marketing for gaming. “Now if you love to rock out on Wii, you’ve got the gear to match your level of commitment to the game.”

The noise dampening design of the strum bar and fret buttons minimizes audio distraction, and lets you focus in on the music. The guitar controller also incorporates a touch-sensitive slider on the fret board (located on the neck) to help you rack up the points by tapping notes.

The Logitech Wireless Drum Controller for Wii features three fully adjustable drum pads and two cymbal pads. Each piece can be positioned to fit your reach and suit your style – and the quiet and responsive drum pads deliver a lively feel that won’t distract you from the music. 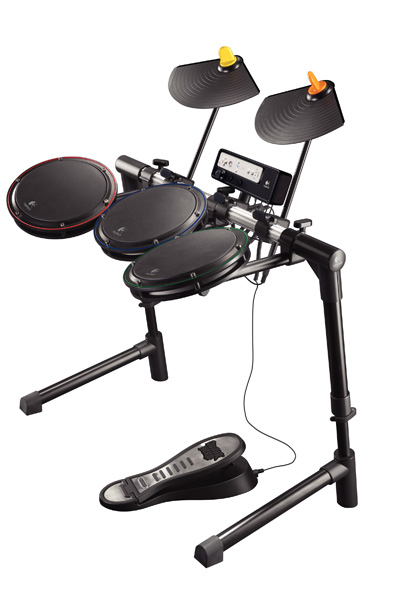 When you’re ready to play, the Logitech Wireless Drum Controller sets up quickly and folds flat in seconds. You can start playing within minutes of opening the box and when the show is over, the set can be easily stowed away.

Both the Guitar Controller and Drum Controller are licensed for Wii so setup is a cinch – your Wii Remote™ snaps into the controllers, and both products feature an analog stick for navigating menus.