The first Hercules eCafe netbook was a bit underhwelming, to put it mildly. Sure, the Hercules eCafe EC-800 it was one of the few tiny laptops on the market with an 8 inch, 1024 x 600 pixel display. But it also featured a pokey 500MHz AMD Geode CPU. Noe Hercules is back with a new model that offers a faster processor in a package just as small.

The Hercules eCafe EC-900 has an 8.9 inch screen, a 1.6GHz Intel Atom CPU, 1GB of RAM, and a 1.8″ 60GB hard drive. It also sports 3 USB ports, an SDHC card reader, a VGA port, 802.11b/g WiFi, and a 6-cell battery. The EC-900’s speakers are located just below the display, which at least in theory, could give make this netbook sound louder, if not necessarily better than similar models. 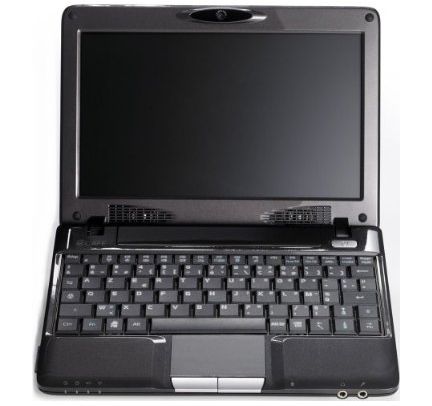 While Hercules doesn’t have any information about the eCafe EC-900 on its web page at the moment, you can read more about it at several French web sites including Blogeee and Generation MP3. Or you can visit the Pioneer Australia web site, since that company sells a virtually identical netbook as the Pioneer DreamBook Lite IL3, which is likely made by the same ODM.