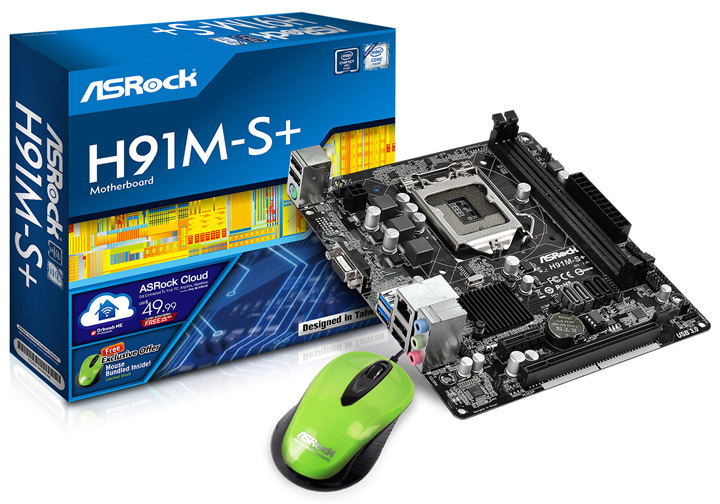 The ever shrinking PC market is a great problem for motherboard makers since they are extremely dependent on it for their profits. In some cases, however, this can be good news for consumers since manufacturers will try to capture attention more and more and sometimes you can find really good deals. The new ASRock H91M-S+ motherboard is a prime example – this entry-level Haswell motherboard comes with a mouse inside as a present. Apparently this is the way ASRock will try to capture attention from now on.

The new ASRock H91M-S+ motherboard is based on the LGA 1150 socket, which means it is designed for the 22 nm Intel Haswell processors. Despite its name, the board uses the Intel H81 chipset, instead of the H91, as the board name suggests. Like we said the ASRock H91M-S+ is an entry-level motherboard so this is the reason why it comes with a 3-phase VRM system, two DDR3-1600 memory slots (up to 16 GB), one PCI-E x1 slot, one PCI-E x16 slot, two SATA 2.0 ports and two SATA 3.0 connectors. The board offers sound too thanks to the inclusion of the 6-channeled Realtek ALC662 audio chip, while the Realtek 8111GR chip provides networking features. In the back the ASRock H91M-S+ motherboard offers a single PS/2 connector, four USB 2.0 ports, two USB 3.0 ports, three Mini-Jack connectors and a D-Sub port.

The new board should be on the market any time soon. Unfortunately there’s no information how much it costs.