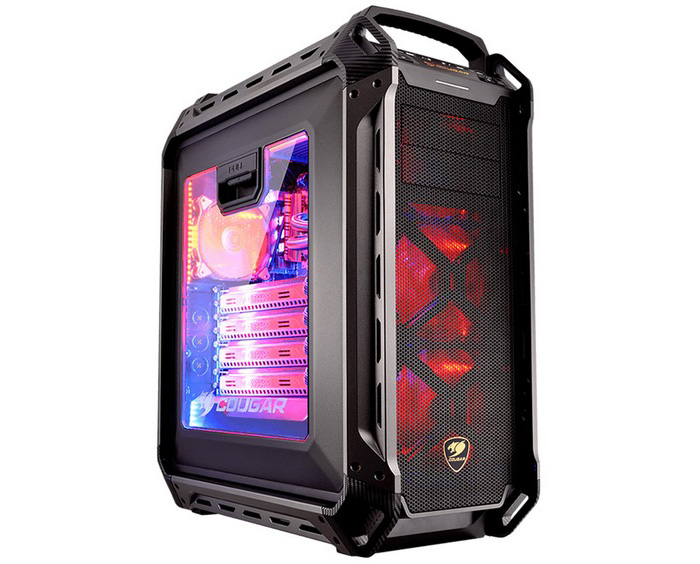 The company Cougar, which is known for making PC cases and various other PC peripherals, has announced the new Panzer Max computer case. This new chassis features the Full Tower form factor and has been designed for high-performance gaming PCs.

The Panzer Max PC case measures 556 x 266 x 612 mm (L x W x H) and weighs around 11 kilograms, which makes it one massive PC case. This also means that the folks at Cougar have used thick and high quality steel for the making of the Panzer Max. The case supports motherboards as large as E-ATX, video cards that are up to 390 mm long and CPU coolers that are as tall as 170 mm. The case also comes with two universal 2.5/3.5-inch drive bays and four 2.5-inch bays. On the inside the case comes with two 5.25-inch bays and eight expansion slots for video cards and other similar devices.

The case features three 120 mm cooling fans, two of which are located on the front panel and there’s also one at the back. Up front users can install up to three 120 mm fans or three 140 mm fans and the top panel can accommodate two 140 mm fans or three 120 mm fans. At the back the case supports a single 120 mm cooling fan and the bottom panel can house one 120 mm fan or one 140 mm fan. The case also supports liquid cooling solutions with radiators as large as 360 mm up front, 120 mm at the back and 120/140 mm at the bottom. There’s a fan controller too inside the Panzer Max.

The new Cougar PC case will be in stores on August 9. The case will sell for around USD 195.