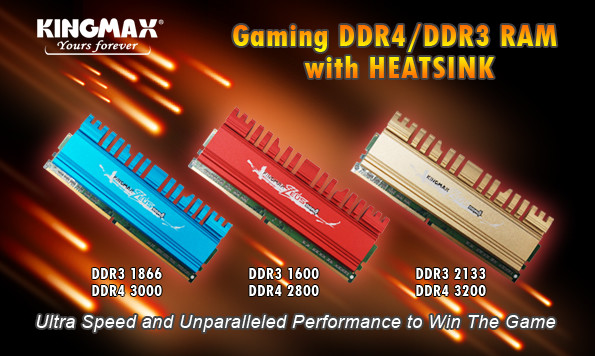 The Taiwanese memory maker Kingmax is getting ready to unveil new DDR4 memory at the upcoming Taipei Game Show 2016, which is scheduled for January 29 – February 2 this year.

The new memory is called Zeus and comes with a number of nice features such as high clock speeds, low CAS latencies, low voltage and support for the latest Intel Skylake processors. The Zeus DDR4 gaming RAM runs at 2800 MHz, 3000 MHz and 3200 MHz and offers capacities ranging from 4 GB, 8 GB and 16 GB. The memory will be available in kits too, which means users can get up to 32 GB of Zeus DDR4 memory. The memory modules in the new Kingmax memory line come with aluminum heat sinks for better heat dissipation. The heat sinks are colored in Turquoise Blue, Stylish Gold and Ruby Red colors and they can even come with franchise themes such as League of Legends, Dynasty Warriors and Miku.

The new memory by Kingmax will be available after Taipei Game Show 2016. There’s no information how much the Zeus memory will cost as of now.