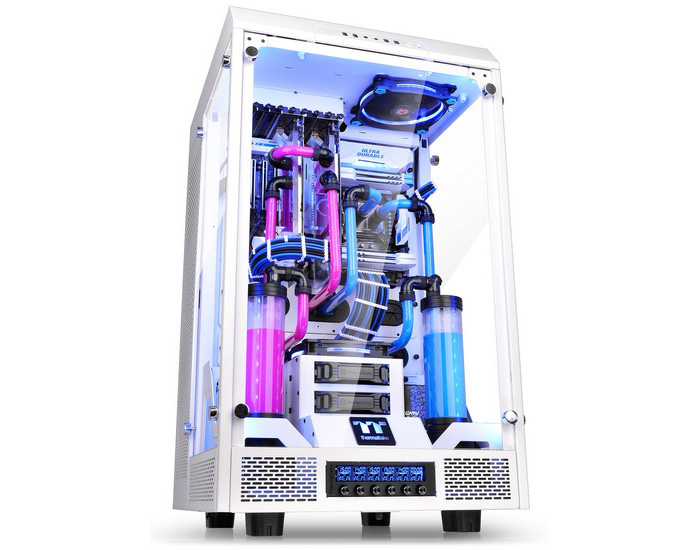 Thermaltake has demonstrated an unusual computer case, called The Tower, at Computex 2016. Truth to be told, The Tower is still a prototype of a PC case, but nevertheless the new chassis is very interesting.

The Tower has been designed and created with help from the famous designer Mathieu Heredia. The case features acrylic panels that are situated on three of the four walls of the case so you can view the hardware inside from almost any angle. In addition to this The Tower comes with an unusual hardware layout – the motherboard and the video card are placed in such a way so that their rear ports are on top of The Tower instead in the back. The case also comes with support for an unknown number of 2.5-inch and 3.5-inch drives. Inside The Tower has enough space to house up to three videocards that are up to 400 mm long, CPU coolers that are up to 260 mm tall, and PSUs that are up to 220 mm long. The case supports up to ATX-sized motherboards, though. In addition to this The Tower has support for liquid cooling solutions with radiators that measure 480 x 120 mm or 560 x 140 mm and support for 120 mm and 140 mm cooling fans. Inside the case also has an integrated fan speed controller.

Unfortunately it is unclear when The Tower will enter mass production and how much it will cost so let’s hope to see it in stores soon.