At present, there’s problems in the ordinary cooling fans of the graphics cards sold in the markets with insufficient wind pressure and insufficient wind flow which could let users to fear of trouble in the rear. With strong R&D team, Calibre IDF (Intelligent Dual Fly) Cooling System was born in the SPARKLE R&D labs. SPARKLE breaks restraints of traditional conception. innovates in cooling system design, bringing more humanized cooling system, as well as richer DIY pleasure. 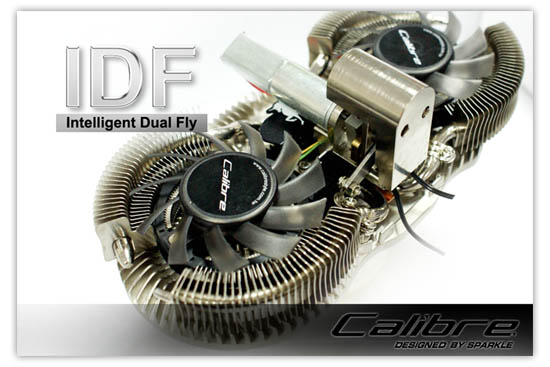 The Calibre IDF (Intelligent Dual Fly )Cooling System consists of aluminum die-casting thermal base with copper core inside, three high-efficient heat pipes and dual cooling fans with 0.2 mm thin cooling fins. When the GPU starts working, the copper die-casting thermal base will quickly take the working heat from the GPU to the heat-pipe horizontally put inside the thermal base, and the heat will be equably and rapidly spread to the left part and right part of the copper die-casting thermal base, at same time, the two circular heat pipes also quickly bring the heat from GPU to the 0.2 mm thin cooling fins, now the strong wind pressure and airflow made by two cooling fans take all the heat out of the cooling module. This Cooling System developed by SPARKLE itself can get the most heat exchange area in a limited space, guarantee a highly efficient cooling effect.

In order to expediently know the live working condition of the graphics card, and with strong R&D teams, the SPARKLE third generation GDP daughter card-GBOX provides vivid live working condition for better convenient surveillance, it’s equipped on the five Inch bay of the chassis. Connecting the Graphics Card through a cable, user can choose the display content, such as GPU temperature, GPU working voltage, fan speed. User can preset the working temperature on the GBOX for the Calibre IDF (Intelligent Dual Fly )Cooling System . Now users can master the working state of his Graphics Card more convenience.