Just a week ahead of the Mobile World Congress in Barcelona, Spain, LG has unveiled a new weapon in its quest for market domination – the Optimus Vu smartphone.

The novelty comes with a 5-inch display and LTE support and aims directly at the Samsung Galaxy Note. What’s interesting about the new phone is the unique 4:3 aspect ratio of the display and not only is it 5-inch but it also comes with 1024×768 pixel resolution. The large screen and the unique aspect ratio make the Vu very wide when held in portrait mode measuring 90.4mm (3.56in) across. It is also 139.6mm (5.5in) tall and a scant 8.5mm (0.34in) thick, which, according to LG, makes it one of the slimmest LTE phones on the market.

On the inside the Optimus Vu comes with a 1.50 GHz dual-core processor and 1 GB of DDR2 SDRAM. On-board storage is 32 GB and there also are an 8-megapixel camera with LED flash on the back and a 1.3-megapixel camera up front. In addition LG has provided a Rubberdium pen that lets the user jot notes or draw on the Vu’s display. Another feature is the QuickClip hotkey that allows easy screen shot captures. The battery powering all this is 2080 mAh. The Vu also supports HDMI out and DLNA content sharing. 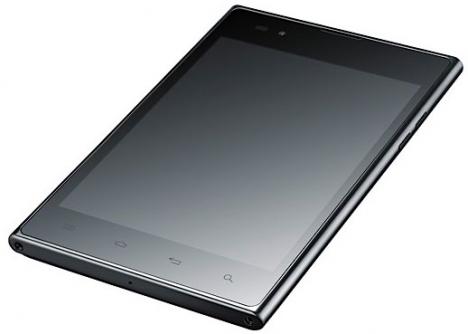 Unfortunately the LG Optimus Vu will come with Android 2.3 Gingerbread but LG says that users will be able to upgrade to Ice Cream Sandwich later on. Commercial availability is expected in March in South Korea but as of now nothing is known about pricing and worldwide availability. More details are likely to surface at MWC later this month.