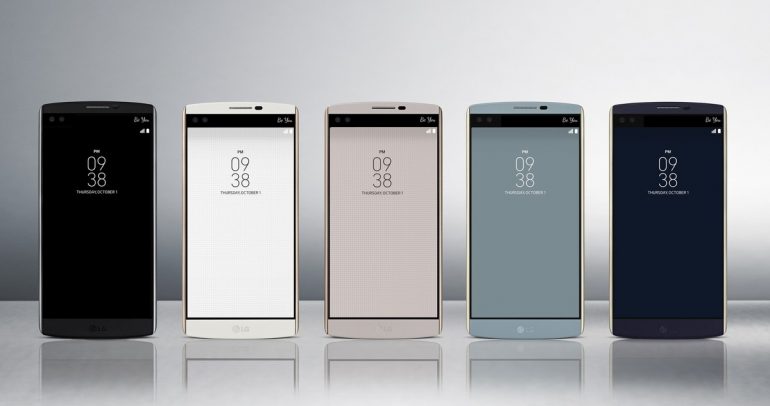 LG has officially introduced the V10 smartphone, which was leaked a while ago. Back then the device was rumored to have two displays and in reality it has them!

The new V10 handset is the first in the new LG V series of smartphones and the major feature of this premium device is the secondary display which is situated on top of the main display. The secondary display is 2.1 inches long and works at the unusual resolution of 160 x 1040 pixels. Its role is to provide users with extra information and a convenient way to run the most commonly used apps. In most cases this secondary display will be active all the time.

In addition to this the new V10 has two front cameras with 5 MP of image sensitivity but the first camera has an 80-degree lens, while the second one sports a 120-degree lens. The duo allows users to create wide-range pictures and both cameras work at the same time when shooting. In the back users will find a single camera that comes with a 16 MP sensor and an aperture of f/1.8. The camera allows users to shoot high-resolution videos and change various crucial photo options like ISO sensitivity and more.

Apart from this the V10 looks like the G4 flagship a lot. The handset has a 5.7-inch display that works at 2560 x 1440 pixels and sports Gorilla Glass 4 protection. There’s a Snapdragon 808 processor too, as well as 4 GB of RAM, 64 GB of internal memory, a microSD card slot (up to 2 TB) and a 3000 mAh battery. We should also say that the V10 has a stainless steel frame and a special material for the back that is called Dura Skin. Obviously this material makes the device more durable. In addition the V10 has a special ESS Technology audio chip that provides premium sound to all users and a special fingerprint reader.