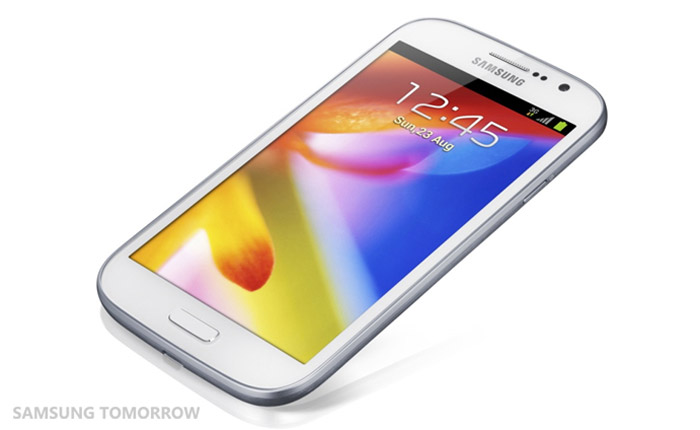 After hearing rumors of upcoming new Samsung smartphones for the past few weeks the first one seems to have arrived – the South Korean tech giant Samsung officially unveiled the Galaxy Grand smartphone.

The newcomer’s release date and pricing will be announced at the upcoming CES 2013 next month but it’s for sure now that the Samsung Galaxy Grand will be available in two versions – one with a single SIM card and another with support for two SIM cards. Measuring 143.5 x 76.9 x 9.6 mm for total weight of 162 grams, the Samsung Galaxy Grand features a 5-inch TFT WVGA display at 480 x 800 pixels and multitouch. Inside the smartphone will house a dual-core processor at 1.2 GHz, 1 GB of RAM, 8 GB of storage, a microSD card slot with support for cards with capacities of up to 64 GB, a rear 8 MP camera with auto focus and a front 2 MP camera with support for 720p video. Other specs include accelerometer, compass, gyroscopic sensor, Wi-Fi, Bluetooth 4.0, GPS receiver, support for HSPA+ networks (but no LTE) and a 2100 mAh battery.

Once it launches the Samsung Galaxy Grand will be available in the dual-SIM version only. The smartphone will run Android 4.1 Jelly Bean.