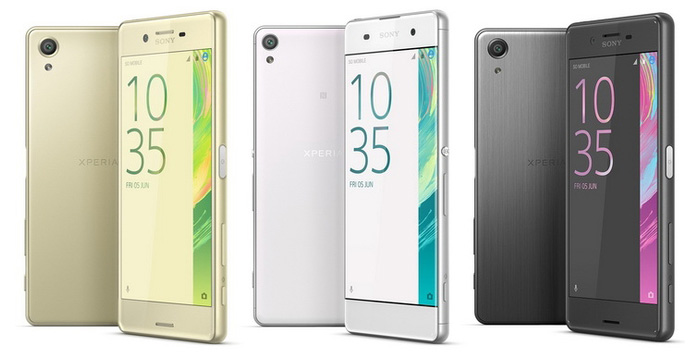 The Mobile World Congress (MWC) 2016 exhibition has started in Barcelona, Spain, which means that in the next few days we will get to see tons of new smartphones and other portable devices. We’ll start the coverage of MWC 2016 with the news that Sony has announced three new smartphones – the Xperia X, Xperia XA and X Performance. The new devices belong to the brand new X line of Sony smartphones and at least one of them deserves to be called a flagship device.

The new Xperia X smartphone is a top-of-the-line handset that comes housed in a metallic chassis. The device is equipped with a powerful Snapdragon 650 processor and has 3 GB of RAM, 32 GB of internal memory, a microSD card slot for expansion (up to 200 GB), a 5-inch display that works at Full HD resolution and a fingerprint scanner. The smartphone boasts a really nice 23 MP rear camera with the so-called predictable autofocus technology and up front it also has a 13 MP shooter for selfies and video clips. The smartphone is powered by a 2620 mAh battery that should provide at least a day of problem-free usage.

The Sony Xperia XA is a cut-down version of the Xperia X and as such comes with less powerful hardware – the handset is based on the MediaTek MT6755 (Helio P10) processor that packs eight Cortex-A53 cores. While the chip inside is not to be underestimated, the Xperia XA comes with a 5-inch display that works at 1280 x 720 pixels, 16 GB of internal memory, a 13 MP rear camera with no predictive autofocus and a 2300 mAh battery. The amount of RAM is unknown but we suspect the Xperia XA comes with the same 3 GB of RAM inside.

The Xperia X Performance smartphone is the device that steals the show – this handset comes with the new Qualcomm Snapdragon 820 processor, 3 GB of RAM, 32 GB of expandable internal memory, a 5-inch display that works at Full HD resolution, a 2700 mAh battery and two cameras – a 23 MP rear camera and a 13 MP front one. The device also features protection against water, dust and shock.

The Sony Xperia X and Xperia XA will be on the market by the end of May. The devices will come in white, gold, pink, and black colors and will sell for EUR 599 and EUR 299, respectively. The price and the availability date of the Xperia X Performance are unknown as of now. It is important to note that all three new Sony smartphones run Android 6.0.1 Marshmallow.