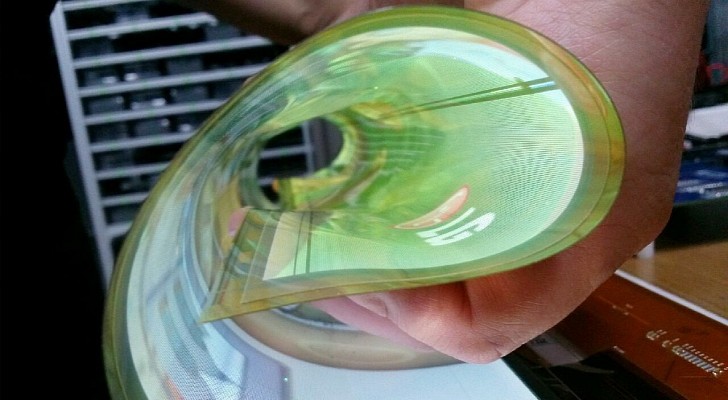 Truly flexible displays have been a dream for many years and although some such displays appeared a while ago they were never really able to twist. Now all this may change for real thanks to the efforts of LG that has demonstrated an 18-inch OLED display panel that can be rolled into a cylinder and still work!

The secret to this flexibility is hidden in a new polyamide film that is applied to the back of the panel instead of normal plastic. There’s more to it, though – it is also thinner than the films of such type used until now.

Unfortunately the new LG flexible panel is not perfect – its resolution is just 1280 x 810 pixels. LG says that it works on larger flexible displays with much better resolutions but an Ultra HD flexible panel (3840 x 2160) of 60 inches in size is only expected in 2017. Meanwhile LG will release smaller-sized flexible OLED displays and so will other LG competitors such as Samsung but if you think that you will be able to install such a display in your living room this decade you may be wrong – things are much more complex because apart from improving these OLED displays manufacturers now have to think about including PCBs, speakers, bezels and many more things.

Still, flexible displays are a nice technological achievement and who knows when and where they will find mass adoption. Given current tech development this may happen sooner than expected.