Sharp Corporation and Sony Corporation today entered into an agreement (the “Joint Venture Agreement”) to establish a joint venture company to produce and sell large-sized LCD panels and modules.

On July 1, 2009, Sharp split out its new LCD panel plant located in Sakai City, which is under construction, and transferred it to Sharp Display Products Corporation (“SDP”), its wholly-owned subsidiary. SDP is scheduled to commence operations in October 2009. On December 29, 2009, as the first step toward the final investment ratio (66% by Sharp and 34% by Sony), Sony will invest 10 billion yen into SDP in exchange for new shares to be issued by SDP to Sony as third-party allocation. As a result of this transaction, SDP will become a joint venture company of Sharp and Sony on the same day. The Joint Venture Agreement further provides that Sony will make a number of additional capital injections to SDP subject to conditions set forth in the Joint Venture Agreement.

SDP will seek to maximize the advantages gained from using the world’s first 10th generation glass substrates to produce large-sized LCD panels and modules that deliver the industry’s highest levels of quality, cost and performance.

Sharp and Sony will further discuss joint development of components for LCD modules to strengthen their mutual collaborative relationship.

(4) Principal Business: Production and sales of LCD panels and modules 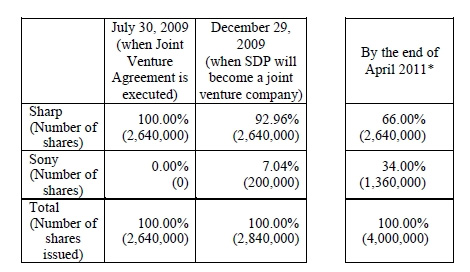