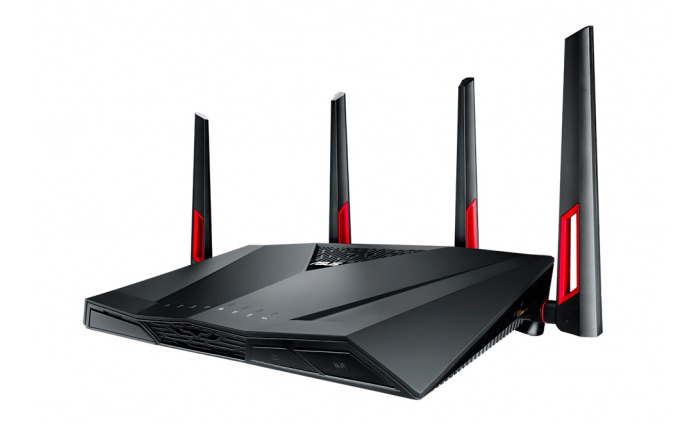 ASUS has added one more gaming device under its Republic of Gamers (ROG) banners making it almost a reality to create a ROG world around you… given you are a hardcore gamer. This time the device is a gaming router that is known as ROG RT-AC88U. The device, as expected, is now here to bring you exceptional network performance for all kinds of gaming sessions.

ASUS claims that the new ROG RT-AC88U router can deliver speeds of up to 2.1 Gbps on 5 GHz band and up to 1 Gbps on 2.4 GHz band. This is done through the latest 802.11ac Wi-Fi technology, which the ROG RT-AC88U fully supports. Thanks to this exact technology the router can deliver dual-band data rate of 3167 Mbps for low latency gaming and streaming Ultra High Definition movies. To do all this, the router uses a 4 x 4 antenna configuration with AiRadar universal beamforming. And for those of you who use good old wired network connections, the ROG RT-AC88U offers no less than 8 Gigabit LAN ports.

The new ASUS ROG RT-AC88U gaming router also comes with a single USB 3.0 port for sharing storage over a network and another USB 2.0 connector for sharing connected printers or scanners. The USB ports can also be used to connect a USB 3G/4G network adaptor to the router. The rest of the specs include AiProtection for security and privacy, Parental Controls, up to 4x capacity Wi-Fi with MU-MIMO, built-in client and free subscription to WTFast Gamer Private Network (GPN), a 1.4 GHz dual-core processor for higher USB/WAN/LAN speeds and link aggregation.

The new ASUS gaming router will be on the market by the end of the year. There’s no information how much it will cost, though.