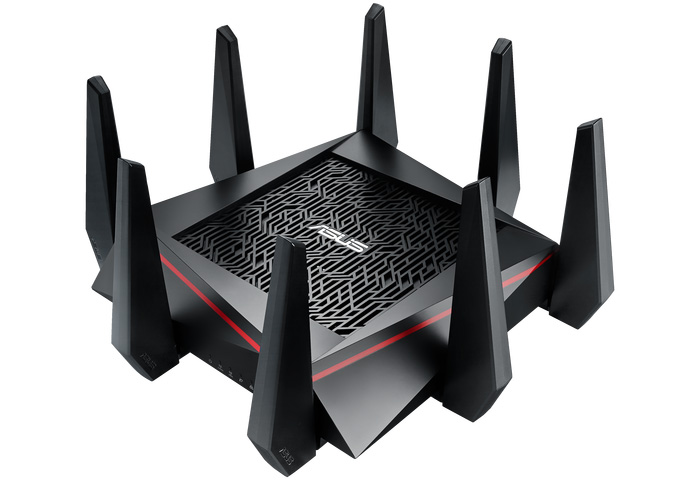 The IFA 2015 trade show for consumer electronics has become the birth place of what seems to be the world’s fastest Wi-Fi router. Once again such a device comes out of ASUS, which presented the monstrous RT-AC3200 router a while ago. Well, the new RT-AC5300 is much, much better than the older model, which it has come to replace.

The new RT-AC5300 Wi-Fi router is a tri-band router, just like the older RT-AC3200 model. The device has two bands at 5 GHz and one at 2.4 GHz but thanks to the newest installed Broadcom Wi-Fi chip each band has much higher bandwidth than before. More precisely on the 2.4 GHz band the RT-AC5300 has a top Wi-Fi speed of up to 1000 Mbps and on the 5 GHz bands each one of them can transfer 2167 Mbps. If you combine the three bands you will see that the ASUS RT-AC5300 has total Wi-Fi bandwidth of over 5300 mAh at any given time. Of course in real life the speed will be somewhat lower but in any case the RT-AC5300 is one exciting piece of hardware, especially when you find out that despite the speed the RT-AC5300 is compatible with almost all older Wi-Fi standards, including Wi-Fi 802.11b.

The router excels in one more area too – it has eight dual-band detachable antennas, which is the highest number of external antennas on a home router to date. The RT-AC5300 also has one USB 3.0 port and another USB 2.0 port and supports external printing devices as well as external hard drives. In the back the device also has one Gigabit WAN port and four Gigabit LAN ports.

The new ASUS RT-AC5300 Wi-Fi router will be in stores by the end of the year. The device will cost around USD 400 and this price will also include an easy-to-use interface as well as ASUS AiProtection network security services.