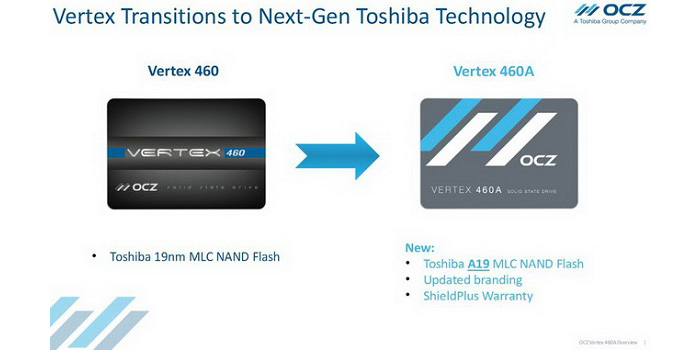 The popular SSD maker OCZ has updated its Vertex 460 SSD line, which was launched earlier this year. The update includes new Toshiba MLC NAND A19 flash memory based on 19 nm production process and… this is it.

To distinguish them from the “old” Vertex 460 SSDs, the new and updated solid-state drives belong to the all new Vertex 460A SSD line. Do not expect anything else though – the SSDs are as fast as before and feature 540 MB/sec of read speed and 525 MB/sec of write speed and the same Indilinx Barefoot 3 M10 memory controller, which can be found in the older Vertex 460 line. The Vertex 460A line now includes models with capacities of 120 GB, 240 GB and 480 GB.

OCZ has thought of its customers, however – the Vertex 460A line comes with the company’s new ShieldPlus warranty that allows customers to provide OCZ with the device’s serial number only with no purchase receipt needed when filing a claim. In addition the warranty now covers shipping costs both ways for customers living in the USA or the European Union.