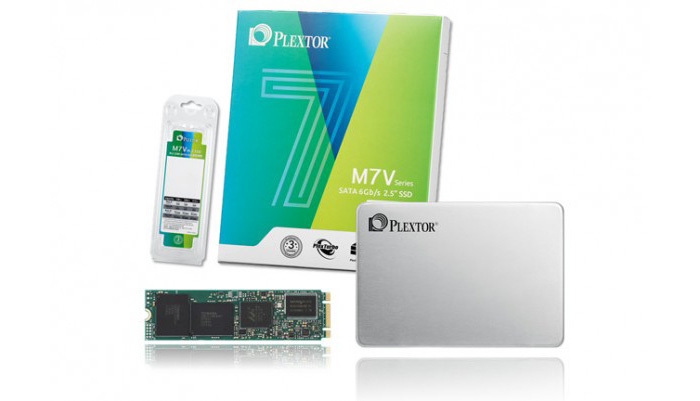 Plextor has announced a new solid-state drive family called M7V whose main goal will be to provide budget-oriented users with affordable SSDs as well as put some competitive pressure on other SSD makers that sell the same class solid-state drives.

Not surprisingly then the M7V line uses TLC NAND flash memory to store data but Plextor has an ace in its sleeve – the new SSD family comes with a special and exclusive firmware that allows the M7V to surpass the current TLC SSD’s key technical limits, reaching a P/E cycle of up to 2000 times and in addition to this the M7V line uses Toshiba’s latest 15 nm TLC NAND flash memory. The new solid-state drives are also based on a new generation Marvell memory controller that has been specifically designed for TLC NAND and include numerous Plextor technologies that further improve the overall SSD performance. The M7V line currently includes three models with capacities of 128 GB, 256 GB and 512 GB and all of them are available in two form factors – 2.5-inch and M.2. Performance-wise the drives reach up to 560 MB/sec of sequential read speed and up to 530 MB/sec of sequential write speed and random read/write speed of 98K/94K IOPS. In addition the M7V solid-state drives make use of two Plextor software programs called PlexCompressor and PlexVault. PlexCompressor can compress files that have a low usage rate, while not affecting the SSD efficiency, thus providing more free space to the end user, while PlexVault allows users to set up a special place for sensitive information and then keep it there, thus providing excellent privacy and security to the data in question.

The new Plextor M7V solid-state drives will be in stores later this month. Unfortunately there’s no information how much they cost.