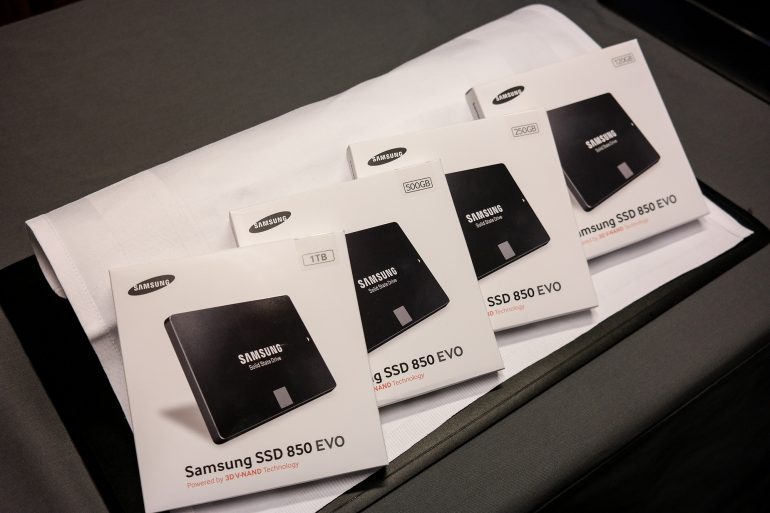 Yesterday we reported again on the Samsung SSD 850 EVO solid-state drive line saying the drive would launch in the next few weeks. Well, Samsung has surprised everyone by launching the SSD line now instead of later but this is never bad news plus we now have more technical information. On your side you can get one of these SSDs for Christmas so all is good.

Let’s see what we have here. We have covered most of the specs already but we will list them again nevertheless. The Samsung SSD EVO 850 is based on an in-house multi-core Samsung MGX or Samsung MEX memory controller depending on the model and has 32-layer 3D V-NAND flash memory with improved tech specs and higher density inside. This is the reason why the Terabytes Written (TBW) indicator in the SSD 850 EVO has been raised to 75 TB compared to 43 TB in the SSD 840 EVO.

There are four models in the line with capacities of 120 GB, 250 GB, 500 GB and 1000 GB and all of them support SATA 3.0. The drives also have between 256 MB and 1024 MB of LPDDR2 cache memory on board. As to performance the drives reach 540 MB/sec of sequential read speed and 520 MB/sec of sequential write speed. The line is also very energy efficient – a single SSD EVO 850 drive needs no more than 4 mW of power when idling and 4.4 watts of power when operating. Data is very important and you can now rely on Samsung’s Dynamic Thermal Guard technology to keep track of the SSD temperature. In addition the Samsung TurboWrite technology allows the end user to create virtual cache memory that increases the performance of some memory cells while writing data. The Samsung Rapid technology lets users use up to 4 GB of the system RAM for cache as well if such a need arises. How does all this sound?

The Samsung SSD 850 EVO line will be commercially available by the end of December 2014. No word on pricing as of now.

Intel Introduces Core i7, Xeon 3400 and First Core i5 Processors