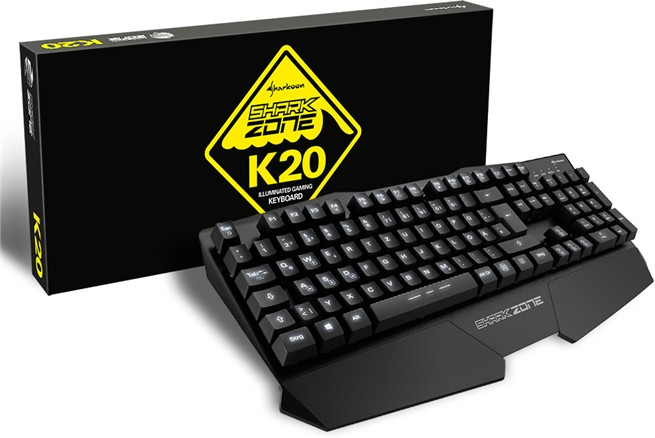 The maker of gaming peripherals Sharkoon has just announced a new gaming keyboard under the Shark Zone K20 brand name. The new keyboard is massive but offers simple operation and LED illumination in three colors.

As you can see from the pictures the new Shark Zone K20 gaming keyboard is a full-sized QWERTY keyboard, which makes it sturdy and heavy but also hard to move amidst heated gaming battles so you will always know where your keys are. Speaking of this the SharkZone K20 is completely made from metal, which is impressive. The keyboard comes packed with numerous features but all of them can be accessed by using certain keyboard shortcuts and software installation is not needed. In addition to this the palm rest contains two nonslip silicone pads, which can be removed and cleaned with water, if this is needed.

The so called Shark Zone function key makes it very easy to adjust the illumination and the color settings. The background illumination offers three colors – white, red and blue and can be adjusted via a simple shortcut. This is true for the lighting effect as well, which cycles through the illumination intensity (50 per cent, 100 per cent and off) and the pulsating effect. Gamers can also disable the Windows key so that they won’t minimize their games to the Windows desktop when playing and if this is not necessary all keys on the keyboard can be locked if need arises. The Shark Zone K20 gaming keyboard offers an interesting new feature – the WASD keys can be interchanged with the arrow keys. In addition the keyboard has seven multimedia keys so you can start multimedia apps with ease.

Managing your work space to a more productive you