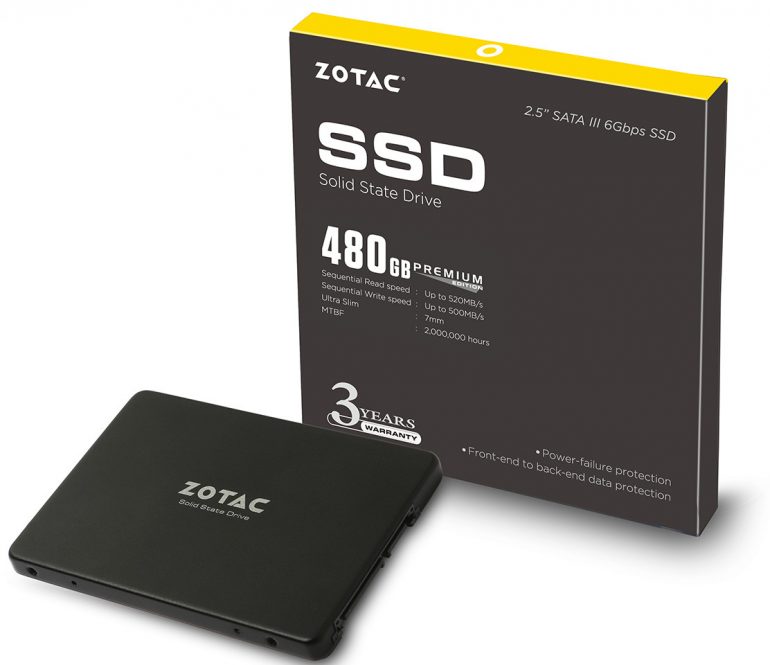 The Chinese company Zotac, known for making video cards, has presented a new batch of solid-state drives under the Premium Series brand name. The new SSDs are designed for use in desktop and notebook computers but they are also suitable for use as external storage drives.

Zotac quietly entered the SSD market back in June with the launch of the Zotac Speed SSD, which offered 120 GB of capacity under the hood. The new SSDs by Zotac clearly show the success of the Speed and the belief of the company in the growing SSD market. Still, the new Zotac Premium Series line of solid-state drives includes only two models as of now with capacities of 240 GB (ZTSSD-A4P-240G) and 480 GB (ZTSSD-A4P-480G). Despite this Zotac has made every effort to provide its own SSDs with premium hardware inside – the new solid-state drives come with quad-core eight-channeled Phison S10 controllers and MLC NAND flash memory made by Toshiba. In addition to this the models have 256 MB (240 GB model) and 512 MB (480 GB model) of DDR3 memory serving as cache as well as support for the newest SATA 3.0 standard.

No word on pricing but the two models come with a 3-year warranty.