To provide flight simulation enthusiasts with a realistic experience, Logitech today unveiled the Logitech® Flight System G940. The latest addition to the acclaimed Logitech G-series line of gaming peripherals and the company’s first force-feedback flight simulation controller, the design and controls of the Flight System G940 were inspired by military and commercial planes and helicopters.

“There’s nothing ordinary about a G-series gaming peripheral, and the G940 is no different,” said Ruben Mookerjee, Logitech’s director of product marketing for gaming. “We approached this project with the goal of redefining the flight sim experience. Whether you’re flying an A380, an F/A-18 Hornet or a Comanche helicopter, when you want to feel the wind on your wings, control engines together or independently or master tricky maneuvers, the G940 behaves and feels like the real thing – from takeoff to landing.”

For an immersive experience, the three-component Logitech Flight System G940 features a force feedback joystick, dual throttle and rudder pedals. And, with more than 250 programmable button options integrated into a fully featured HOTAS (or Hands On Throttle-and-Stick) design, you’re able to access critical aircraft systems without taking your hands off the controls. 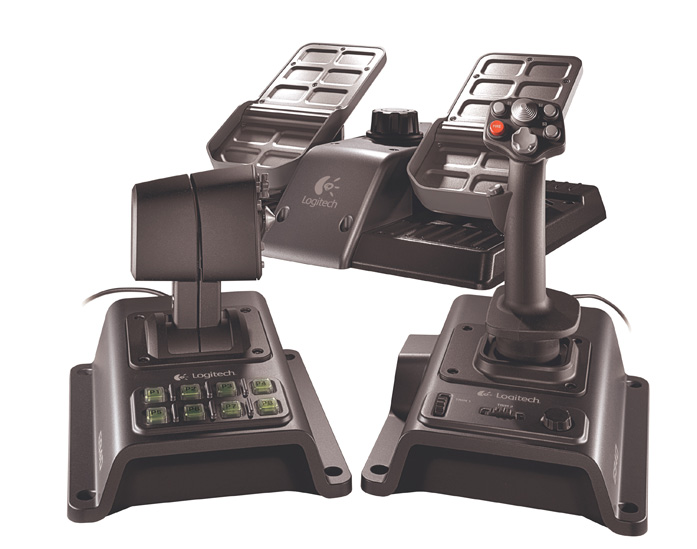 The system is also easy to set up; just connect the throttle and the pedals to the joystick cable, and plug the USB connector into your computer. And all components feature mounting hard points, making it easy to secure them to a surface. The Flight System G940 is compatible with most popular PC flight simulators, including Microsoft® Flight Simulator X, IL-2 SturmovikTM: 1946 and Lock On: Modern Air Combat X-Plane 9.

For added realism, the Flight System G940 joystick features Logitech’s award-winning force feedback technology, which allows you to control your aircraft with confidence as you feel its movement as well as its reaction to air, turbulence and g-forces. Unlike vibration feedback or rumble technology, force feedback is directionally precise and tactile, so you get an accurate simulation of the forces experienced in the game.

Featuring a two-stage metal trigger, six programmable buttons, mini-stick, 8-way hat and three analog trim controls, the Flight System G940 joystick is designed to put you in complete control of your aircraft. And to ensure comfort during long flights, the joystick has a wide, solid base, a palm rest, a slight forward tilt of the stick and soft touch surface.

To give you realistic control over any aircraft, the Flight System G940 features a split throttle design, for easy control of multi-engine aircraft. When flying a single engine aircraft, a push-button interlocks the throttles for a more comfortable experience.

The interactive, programmable throttle-base buttons integrate with your favorite flight simulation software and illuminate red, green, amber or off to indicate the status of critical aircraft systems – just like they would in a real cockpit. For your convenience, Logitech includes 80 pre-designed legend inserts that slip into the buttons, making it easy to create an authentic switch panel with, for example, GPS, autopilot and landing-gear controls.

The pedals – the four-bar mechanism, inspired by the designs of current jet fighters – feature an open frame design with rudder controls and toe brakes, giving you true-to-life control, especially when performing defensive maneuvers or crosswind landings, or piloting helicopters. An adjustable pedal-force knob lets you change the resistance to fit your flying style. And for added comfort, the pedal base has carpet grips and heel rests to keep the pedals and your feet in place even during the most difficult maneuvers.

The Logitech Flight System G940 is expected to be available in the U.S. and Europe in September for a suggested retail price of $299.99 (U.S.).