The Flash Survivor GTR USB drives use the same quad-channel technology employed in the recently announced Flash Voyager GTR series. This enables the Flash Survivor GTR drives to achieve read speeds of up to 34MB/sec and write speeds of up to 28MB/sec. In head-to-head testing in the Corsair Labs the GTR architecture produced substantial performance gains over typical high capacity USB flash drives.

In addition to ultra-high performance, Flash Survivor GTR drives are also extremely durable. Each drive is encased inside an aircraft-grade aluminum shell, which makes it practically indestructible. In independent reviews, Flash Survivor drives have been dropped, battered with hammers, baked, boiled, frozen, zapped in a microwave, and even run over by SUVs, and they still come back for more! Each drive is also fitted with a shock-dampening collar and EPDM seal, which provides water-resistance to a depth of 200 meters. 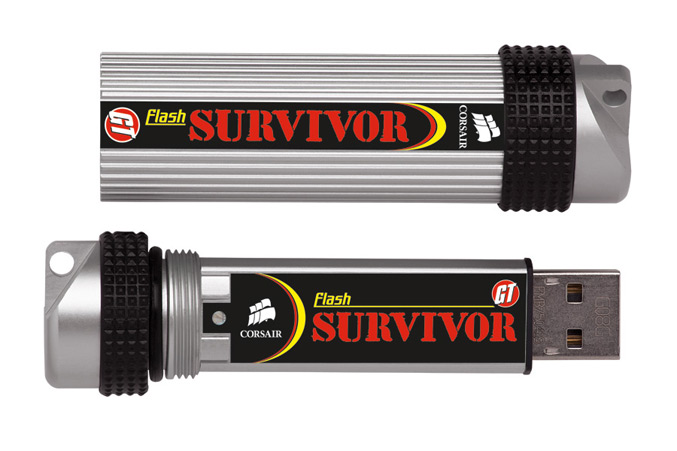 “Corsair’s Flash Survivor drives are considered by many to be the most rugged USB drives in the world, and with the new Flash Survivor GTR series, we have created exceptionally fast, durable USB drives,” said Jim Carlton, VP of Marketing at Corsair. “Flash Survivor GTR drives are ideal for enthusiasts and creative professionals who need rapid access their portable music, videos and important data, without the worry that data could be lost due to physical damage or the elements.”

Corsair Flash Survivor GTR drives are available immediately from Corsair’s worldwide channel of authorized resellers and distributors, in capacities of 32GB and 64GB. They are supplied with a 10 year limited warranty, and are backed up by Corsair’s highly regarded customer service and technical support.