GE Global Research, the technology development arm of the General Electric Company , today announced a major breakthrough in the development of next generation optical storage technology.

GE researchers have successfully demonstrated a threshold micro-holographic storage material that can support 500 gigabytes of storage capacity in a standard DVD-size disc. This is equal to the capacity of 20 single-layer Blu-ray discs, 100 DVDs or the hard drive for a large desktop computer.

The GE team successfully recorded micro-holographic marks approaching one percent reflectivity with a diameter of approximately one micron. When using standard DVD or Blu-ray disc optics, the scaled down marks will have sufficient reflectivity to enable over 500 GB of total capacity in a CD-size disc. 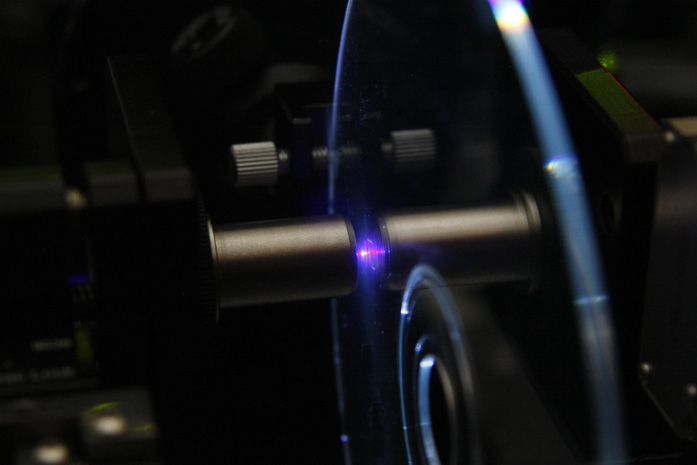 “GE’s breakthrough is a huge step toward bringing our next generation holographic storage technology to the everyday consumer,” said Brian Lawrence, who leads GE’s Holographic Storage program. “Because GE’s micro-holographic discs could essentially be read and played using similar optics to those found in standard Blu-ray players, our technology will pave the way for cost-effective, robust and reliable holographic drives that could be in every home. The day when you can store your entire high definition movie collection on one disc and support high resolution formats like 3-D television is closer than you think.”

GE has been working on holographic storage technology for over six years. The demonstration of materials that can support 500 gigabytes of capacity represents a major milestone in making micro-holographic discs that ultimately can store more than one terabyte, or 1,000 gigabytes of data. In addition to pushing the limits of storage capacity, GE researchers also have been very focused on making the technology easily adaptable to existing optical storage formats and manufacturing techniques.

“GE’s holographic storage program has turned the corner, and with this milestone we can now intensify our efforts in commercialization opportunities,” said Bill Kernick, who leads GE’s Technology Ventures team. “We’ll continue to engage with a variety of strategic partners to create the best route from product development to introduction into the marketplace.”

GE initially will be focusing on the commercial archival industry followed by the consumer market for its micro-holographic storage technology.