The thin-film solar cell featured in the e-book measures 10 centimeters in width and length, it was developed to perfectly fit the 6-inch display panel for e-book currently mass produced by LG Display. The solar cell measures 0.7 millimeter in thickness and weighs a mere 20 grams, the less thickness of a credit card and the weight of a fountain pen. 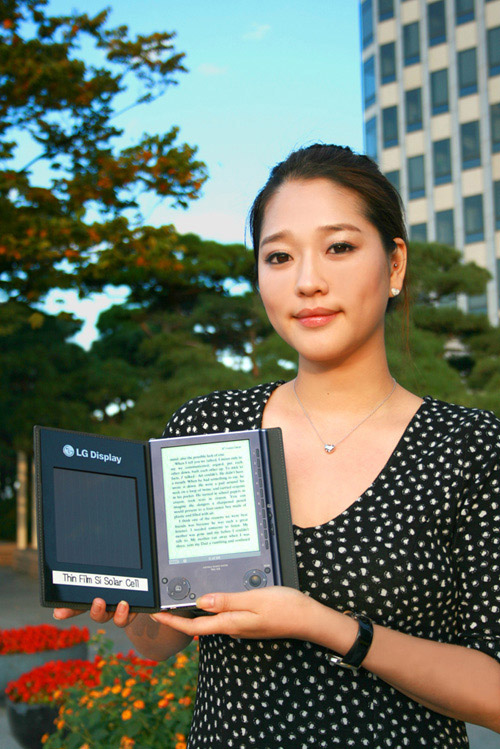 The current energy conversion efficiency rate of this product is approximately 9.6 percent. Exposure to sunlight for about four to five hours would extend the running time of the e-book’s battery by a day without the need for additional charging. This would allow longer outdoor use of the e-book and lessens worries about battery discharging.

Mr. Ki Yong Kim, head of the Solar Cell Office at LG Display noted, “E-books are attracting a lot of attention because they offer the advantage of storing thousands of books’ worth of contents in an easy-to-carry device. The idea of e-book combined with solar cell will offer users the added benefit of longer usage. We will continue to provide users with enhanced convenience and value to solidify our lead in next-generation, environmentally friendly products.”

LG Display previously had announced plans to nurture its thin-film solar cell business as a future growth driver. The company aims to raise the energy conversion efficiency rate to 12% by 2010, and eventually achieve efficiency rate of 14% in 2012 to prepare for commercialization.

During IMID(International Meeting on Information Display) 2009’, LG Display will showcase the prototype of solar e-book, as well as its newest cutting-edge display technologies in KINTEX, Gyenggi, Korea.

Thin-film type solar cells: Thin-film type solar cells are being hailed as a solution to the problems associated with widely adopted crystalline solar cells that employ silicon wafers. Problems include a lack of materials and the high price of materials. By placing electrodes onto a glass or plastic substrate rather than a silicon wafer, process efficiency can be raised by increasing the substrate size. Additionally, the technology would not be susceptible to weight adjustments or conditions of the installation location, making it relatively stable against changes in the external environment. As the related technology is similar to TFT-LCD, the entry barrier is relatively low for LCD manufacturers such as LG Display.