MIMOMonitors.com has announced the addition of the MIMO 720-S “Touchscreen Slider” monitor to its line of USB-driven mini-displays available at www.mimomonitors.com. Arriving quickly on the heels of its younger brother, the 710-S, the 720-S weighs in at less than one pound and features sleek, foldable characteristics, while embodying full resistive touchscreen functionality — an ideal solution for netbook users seeking to gain a little more manipulative visual real estate.

With a display size of seven inches, the MIMO 720-S features 800×480 resolution and a contrast ration of 400:1 — offering sharp graphics and clear images with 90 degree pivoting capabilities. The monitor discretely folds into itself with a tiny footprint of just 7″ x 5 3/8″ x 1″. Supporting Windows XP and Vista as well as Mac OS X (with supplemental third-party driver), the 720-S is powered and connected by a single USB connection, providing a secondary screen ideal for holding email applications, download managers, social network clients such as TweetDeck, formatting palettes, stock tickers, instant messengers such as Google Talk and AIM, webcam feeds and much more. Additionally, with the rise in popularity of netbooks, the 720-S serves as a much-needed secondary screen for added display space and shared viewing. 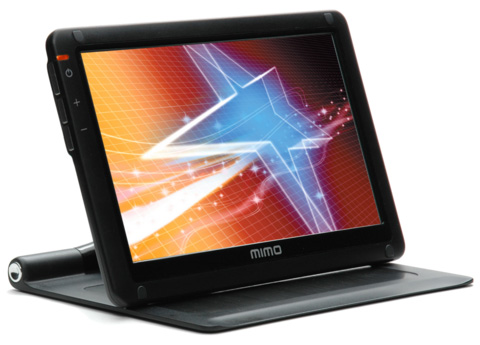 Suitable for a wide range of users, the MIMO 720-S is as transportable and convenient as it is touchable. Like its predecessors, the UM-710, the UM-740 and the 710-S, the MIMO 720-S is ideal for consumers and professionals alike seeking to run multiple applications in a mobile setting.