The new Apple TV which offers an easy way to watch TV Shows and High Definition movies on your HD Television was announced by Apple, and with a price tag of 99 dollars.

Thanks to Apple TV, consumers can browse the hugest online high-definition movies selection and rent for the price of $4.99 on first run movies. They can also browse the largest online TV SHOWS selection, including episodes on shows from ABC, ABC Family, FOX and more for just 99 cents.

Video content from YouTube, Netflix, Flickr and MobileMe, as well as audio and video footage from your MAC and your PC can also be streamed by the Apple TV on your High Definition TV.

The new Apple TV comes with built-in HDMI, Wi-Fi, Ethernet and an internal power supply, making it very easy to use and setup. 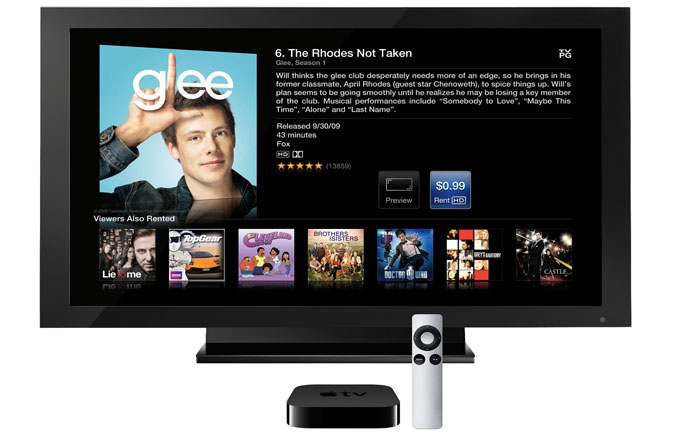 Consumers can rent seven thousand available movies with over 3,400 of them available in high definition. Most of the new releases are even available the day they are released officially on DVD.

Apple TV does not come included with an HDMI cable. Users who purchase the new Apple TV will also be able to control it with their Apple iPhone, iPad or iPod Touch, by using the remote application which is free for download at the Apple Application Store.

The new Apple TV will be available late this month for the price of $99.