The brand new Crosshair IV Formula from ASUS Republic of Gamers, or ROG, ups the ante for everyone with an interest in gaming. Hardcore hobbyists stand to tap a wealth of indulgent performance upgrades to better their odds of domination, while mainstream gamers can expect a new look on what makes the pastime so thrilling.

Core principles behind the conception of the Crosshair IV Formula include meticulous attention to detail and listening to community feedback. Under the eye-catching design, the Crosshair IV Formula boasts ROG Connect for instant tweaking and monitoring of gaming rigs, user-friendly overclocking interface Turbo Key II and proprietary ASUS technologies Core Unlocker and GameFirst. All these guarantee tremendous success with top-line gaming PCs, as the new board offers exhilarating foundations to build upon. 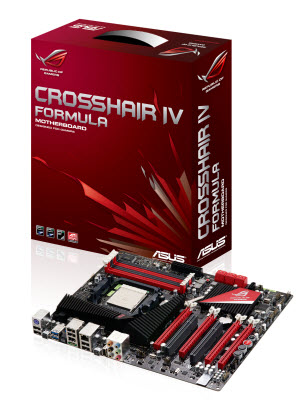 Those bent on ruling the game have just found the new motherboard to beat—resistance is just unnecessary.

All Aboard the Gaming Express

The Crosshair IV Formula deploys the latest chipset architecture from AMD, opening up the most current performance CPUs on the market. Enabling processors to come into their own is exactly what a good motherboard does, and the new Crosshair achieves this in several ways—not least ROG Connect, a built-in overclocking engine that maximizes benchmark scores by tuning and monitoring from a remote PC via USB, like a notebook. This way users can overclock while benchmarking, so all resources remain available to better performance. ROG Connect also serves as an in-depth monitoring tool—gearheads can easily obtain readings to see the effects mods such as overvolting have on their system.

ASUS and Republic of Gamers are proud to announce Core Unlocker, an exclusive technology praised by worldwide media, to inject great value and performance into gaming setups. It’s well known many CPUs come with multiple cores deactivated during fabrication, and Core Unlocker brings those back to life. Users simply have to press one button on the board and the AMD CPU placed in the socket goes through a physical scan in search of dormant cores. Dual core CPUs can become triple or quad in minutes, with obvious computing horsepower benefits. 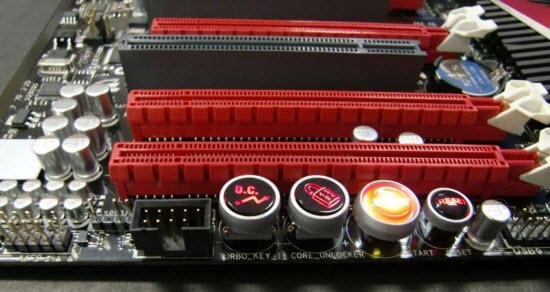 Speaking of thresholds, the Crosshair IV Formula comes with the latest version of Turbo Key II, an auto-tuning routine that lets users engage, sit back, reap the benefits then rule their game with untold confidence.

Turbo Key II runs extensive overclocking automatically, detecting hardware tolerances and testing them to ensure stability. The excellent thermal design of the new Crosshair IV Formula means there’s quite a lot of envelope pushing to be done safely, guaranteeing impressive gains. Once more, all users need to do is press the O.C button on the board and let the technology take it from there.

Game with the Flow

Multiplayer has become the norm, and gamers demand smooth connections to deliver uninterrupted action. The reality, however, is that many still don’t enjoy optimized broadband, which is why ASUS has conjured GameFirst. This smart solution works with the board’s networking pipeline to prioritize bandwidth, eliminate lag and lower latency. 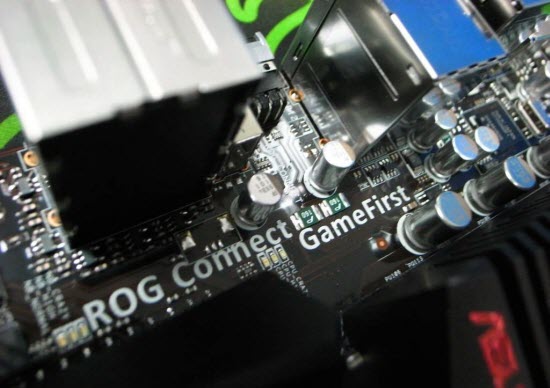 Gaming applications get top access to resources on the hardware level—so online play becomes faster, more fluid and infinitely less frustrating. At the same time, other applications can work in the background without draining speed from mission critical needs.

Storage comes in the form of six SATA 6GB/s and three SATA 3GB/s, ample room for growth and saving all the newest and biggest game titles. Also, the Crosshair IV Formula includes two USB 3.0 ports, which are much faster than USB 2.0 in every way. There’s also HD audio from integrated SupremeFX X-Fi, fully EAX 4.0 compliant and ready to make those intense engagements roar with clear surround sound.

Thoughtful, relevant features that promote fun and satisfying gaming—look no further than the new Crosshair IV Formula from ROG.