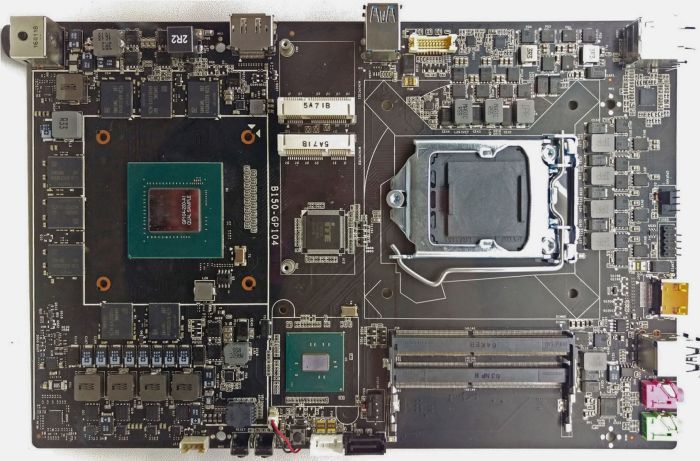 At Computex 2016 Colorful has shown an interesting concept motherboard that comes with an integrated on-board GeForce GTX 1070 GPU that sits next to a LGA 1151 socket. Thus the board will allow the creation of powerful small form factor computers although there’s a hidden price in there.

The custom motherboard is called B150-GP104 and obviously comes with Intel’s B150 chipset. It comes with an unusual design that will fit custom cases only but the possibility to have a fast Skylake processor paired along with the yet unavailable GTX 1070 GPU is exciting. The B150-GP104 board has a 6+2 phase PWM, which makes it moderately suitable for overclocking, if there are any such options, but the price to pay here is that due to the integrated GPU and the memory chips (you get 8 GB of GDDR5 memory) there’s less space for other expansion slots. Thus this interesting Colorful motherboard features just two DDR3L memory slots for up to 32 GB of RAM, a single SATA connector, two M.SATA ports, several USB 2.0 ports, a few USB 3.0 ports, a 2-channeled audio jack, an HDMI connector, a PS/2 port and finally a DisplayPort connector. This does seem like tons of connectivity options but don’t forget – the B150-GP104 lacks a PCI-E x16 slot so you won’t be able to upgrade the GTX 1070 card the motherboard comes with.

It is unclear whether this Colorful motherboard will ever enter mass production but it is nevertheless a nice attempt by the Chinese electronics company. The expected price of the B150-GP104, if it ever becomes available, will be around USD 400-500, which is a decent price, given what the board comes with.