CyberPowerPC offers quad-core systems for everyone 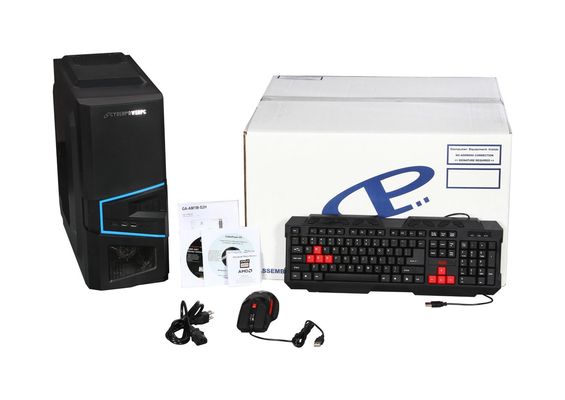 CyberPowerPC is a company dedicated to making powerful computers for all kinds of purposes and especially for gaming. In time the company has offered a large number of innovative and interesting solutions but now CyberPowerPC has something more interesting for everyone – a quad-core system for the masses!

The new initiative runs with help from the popular online hardware store Newegg and is called “Everyman Quad Core”. The title says it all so the only two things that we should check out include what hardware you can get and for how much money.

Currently CyberPowerPC has a single system for its “Everyman Quad Core” campaign and this is the so called EQ100 PC. It includes an ATX-sized case and an AMD Sempron 3850 processor at 1.3 GHz. While this is not the dream quad-core processor it should provide you with enough power for everyday tasks such as Internet surfing, music, e-mail, movies and more including light gaming. As the CPU suggests expect to also find an AM1-based motherboard inside, which is not a bad thing as the AM1 platform is both energy efficient and cost-friendly. The rest of the specs include a single 4 GB DDR3 memory module at 1600 MHz, a 500 GB hard drive and an optical drive. A powerful 500W power supply unit gives energy to all components inside. It is also worth noting that CyberPowerPC has thought about users who may wish to upgrade their systems later on and this is the reason why you get such a power supply unit and a single memory module.

Now to the price – the EQ100 can be yours now for just USD 299.99 and this price includes an operating system, a keyboard and a mouse. Isn’t this a really sweet deal if you need a basic computer?