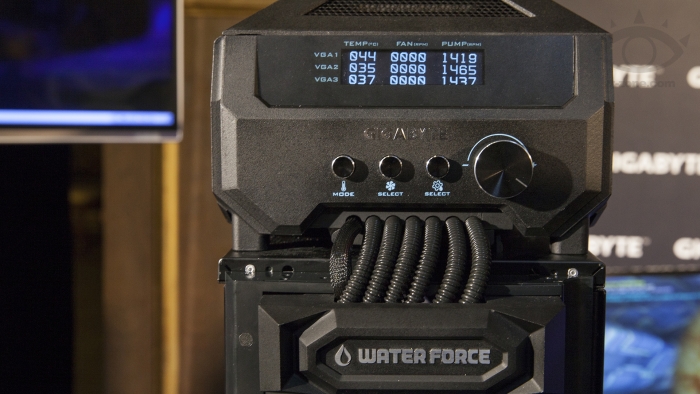 The Taiwanese tech company Gigabyte has presented two new cooling solutions at the on-going Tech Tour 2014 event. The first one is the Gigabyte WindForce 600W, which is already equipped with some GeForce GTX Titan Black graphics cards and the other one is a liquid-based cooling solution known as Gigabyte WaterForce.

The new Gigabyte WindForce 600W is an update to the already released WindForce 450W. Now the new cooling solution can handle up to 600 watts of thermal power compared to the 450 watts the previous version offered. The updated cooler does this thanks to better designed cooling fans and improved heat sinks. This not only makes the cooler more efficient but also quieter.

The Gigabyte WaterForce is perhaps the more interesting solution of the two. It is a complete liquid-based cooler that can handle up to three graphics cards. It consists of water pumps and cooling fans but Gigabyte did not explain the design of the cooler in details. This hints that the WaterForce is an unfinished product and it may take some more time to appear on the market, if ever.